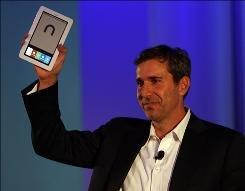 Barnes & Noble's controversial decision to appoint the head of their web division, William Lynch, to CEO of the entire company was surprising and bold.

And it should be a message to the executive staffs of broadcasting and newspaper companies about the changing tides of the media business.

Barnes & Noble has been getting its brick and mortar butt kicked by Jeff Bezos and Amazon.  Between the company's growing strength in online book sales and the success of the Kindle reader, Amazon has change the entire complexion of the business.

Lynch at 39 years old isn't a publishing veteran and hasn't been with Barnes & Noble long.  His background is digital, having held executive posts at HSN.com, Gifts.com and Palm.  In his previous position with B&N, Lynch assisted in the acquisition of Fictionwise, an online bookseller, as well as been instrumental in creating the company's online bookstore and the Nook reader.

So while his promotion surprised some industry analysts, others got the message loud and clear.  The head of HarperCollins Publishers, Brian Murray told The New York Times, "I think this is a very smart move for Barnes & Noble, given the transition in this business from print to digital."

And the company's chairman, Leonard Riggio added, "By appointing him, it sends a signal to the marketplace that we are serious about the business and the way this business is evolving."

Sure, there is risk in bringing in a virtual outsider to a mature business.  But Ford made that work with Alan Mulally.

And given the way the digital revolution has impacted traditional media, it may be an idea whose time has already come.  Barnes & Noble waited until they were thoroughly pummeled by Amazon before making their move.

Will radio wait until Pandora or some other Internet radio service follows suit?