I was privileged last week to be on the "radio stimulus panel" at the Canadian Music Week conference in Toronto, a passionately attended event, now in its 28th year.  Organizer Neill Dixon puts this mega-event together every year, and it is truly a global media and music conference.

If you saw the "radio stimulus czar" session at last fall's NAB Radio Show, or our "Presidents of Radio" panel at our Summit 13 in Austin, you get the gist - a panel of "experts" from different walks of media life giving their best six minute prescription for what radio needs to do to heal itself.

But what distinguished this incarnation from past sessions was the setting and the panelists.  Yes, there was me, Mark Ramsey, and Mike McVay, saying what you'd pretty much expect we'd say.

But then there was Toronto radio icon Humble Howard Glassman and Canadian singer/songwriter Jim Cuddy bringing something very different and very special to this session.  And The Globe & Mail's Grant Robertson, painting a healthier picture for Canadian radio that perhaps what we're used to seeing in the States.  Consultant Ross Davies put together a solid hour of ideas.

A couple of big takeaways from the session... 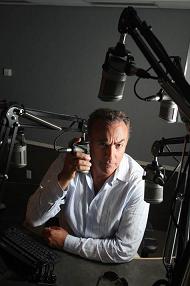 Howard Glassman made a passionate plea for stations to reinvest in personality, and give young, fledgling talent an opportunity to learn their craft.  Quoting from Malcolm Gladwell's Outliers, Howard talked about the necessity of 10,000 hours to learn a new craft, and wondered how radio's stars of tomorrow will ever get that chance to hone their skills like so many of today's big names who worked out their bugs and developed their styles at 3 a.m. hosting the all-night show.

Howard's idea?  "The $75 Solution" - once a week, stations should invest that small amount of money to pay a part-timer or up-and-comer to host the all-night show (5 hours x $15/hour).  How hard is that?

Jim Cuddy focused on his passion, his avocation, and his life - making music.  Cuddy reminded attendees of the importance of radio in breaking new music, and admitted that the last ten years hasn't exactly produced a bumper crop of great material.  He noted that when it comes to exposure and introducing new bands to the world, "the Internet is a flash fire while radio is a bonfire."  (Wonder if anyone from musicFIRST was in attendance.)

Cuddy told the room that while he knows nothing about PPM, he has learned from his decades on stage that if you give people just what they say they expect, it will only take you so far.  By giving them what they want, and then add in a sense of surprise and unpredictability, the result will be so much more powerful because the unusual and unexpected is what truly makes an impression and generates passion.

That's pretty much been the Steve Jobs philosophy over the years, and we sure don't question his logic.

Cuddy also summed up the "Canadian Content" lesson well.  As you probably know, stations in the Great White North have always had to expose a set percentage of Canadian singers and songwriters - a requirement by the CRTC, their version of the FCC.

But as he explained, that process has gone a long way toward creating a sense of national pride in musicians, bands, and song writers.  Today, Canadians have come to love and revere their favorite musical sons and daughters.

It's interesting that in just about every focus group I conduct in the States, listeners express the same amount of passion and interest in local music - musicians from the area who rarely, if ever, get airplay, support, or a whole lot of love.  Listeners are passionate about music from their areas, their hometowns, and their backyards.  And radio is a medium that can do local better than anyone else.

This was a trip well worth the time.

Great recap... thanks! Glad you enjoyed Jim Cuddy's comments. I’ve been a "passionate" Blue Rodeo (Jim Cuddy and crew) fan for 20 years here in the States. Too bad no one knows who they are and they never found a "home" on U.S. radio.