Here we are, in the middle of March Madness, and there are certain things you can count on: upsets, untimely injuries, broken brackets, and ...social networking.

In an interesting strategic move, Georgia Tech coach Paul Hewitt asked his team to give up their cell phones for the NCAA tournament.  The idea is that these devices often "de-focus" players because they are constantly receiving texts, calls, and Facebook and Twitter messages.

By ditching their phones, the Yellow Jacket players discovered their concentration had improved, and they actually spent more time communicating with each other.

As GT guard D'Andre Bell noted, giving up their phones was tough, but it turned out to be a positive experience.  As he told The New York Times, "Just me and my teammates.  More focus.  Everyone's their own person."

We can all relate to the focus part, because our mobile devices - while incredible communication tools - are often distractions that interfere with our work and lives as much as they enhance them. Our Keith Cunningham warns on-air personalities about their show quality diminishing because of the urge to constantly be in touch with texters, followers, and Facebook friends and fans - all while they're doing their shows.

The challenge of this era is constantly connecting without eroding your core mission.  In Georgia Tech's case, it may have been effective.  Since the cell phone ban, they won three games in the ACC tourney, and defeated Oklahoma State in the first round of the NCAA's.

It may be a matter of serving the many at the expense of the few.  Your audience can live without the constant messaging while you're doing your show, and along the way you'll do better radio.

Sadly for the Yellow Jackets, the dance ended for them last weekend as they went down in defeat to Ohio State.  And as a result of the cell phone ban, none of them were able to follow Kentucky Coach John Calipari's tweets.  At more than one million followers on Twitter and 100,000 fans on his Facebook page, the always colorful Coach Cal is mastering social media. And that's what keeps him in touch with rabid Kentucky fans.  Here's the key quote he gave The New York Times: "If you're not doing it, you're behind."

How many DJs, personalities, and entire radio stations still haven't gotten the message that using social media isn't a "time suck?"  If it's done right, the benefits are incalculable. 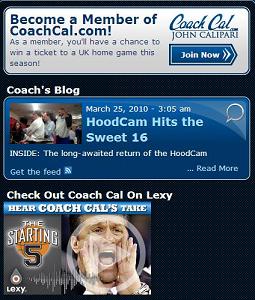 In Calipari's case, he's been savvy enough to also use the digital tools for charitable fund raising for his Calipari Family Foundation for Children, as well as "Hoops for Haiti" (which raised $1.3 million).

Is it just about ego or personal brand building?  While Calipari isn't sure what type of impact all this social media might have on recruiting, let's consider the fact that the target audience of high schoolers syncs up nicely with Facebook addicts.  Plus, the transparency of Coach Cal's messaging and his digital accessibility sets him apart from the other 99% of coaches in the NCAA.

There's no madness in that strategy.

Facebook didn't help Kentucky's Final 4 chances as they were knocked off by Butler. Quick - where's Butler?