One of the joys of writing a blog is that there is no shortage of opportunity to weigh in on the burning issues of the day.  Or to occasionally be a little frivolous and light-hearted, particularly in contrast to some of the difficulties and challenges the many media professionals are facing.

But today, it's a more serious matter that is becoming a bona fide topic in industry blogs and lunchroom conversations.  I have been reading with interest various blogs and articles that seem to suggest that there is diminishing value in "local" - that consumers don't really care a whole lot about locally originated information when they can go to global websites - like Weather.com or Craigslist or Facebook - and quickly tap into information that reflects their towns and neighborhoods.  As Mark Ramsey asked in a recent blog, "If the Internet makes the world 'local,' then what is your advantage?"

Many years ago, I heard Lee Abrams give a speech, back when he was hawking Z-Rock.  In defending the validity of network radio, he asked the audience just how local local stations actually are?  In his monitoring, the only area information he heard was the occasional weather forecast or concert announcement.  And he wasn't wrong.  In fact, back when Lee uttered those words, radio was doing a pretty lousy job of truly serving local markets and audiences.

Today, it's much worse.  A couple of decades later, thanks to the savings that broadcasters have achieved through "economy of scale," you're hard-pressed to find many radio outlets fulfilling their missions as licensees to metro communities.

And as stations streamline, eliminate talk to sound more PPM-friendly, voicetrack to save money, and focus more on their global assets, that singular experience you get when you listen to a great local station truly serving a community has become rarer still.

"Premium choice" does not refer to the feeling that consumers get when they hear a satellite-delivered show from a DJ who strategically drops in an occasional "Shreveport" to relate to area residents.  For listeners, there's nothing "premium" about the experience nor do they have any choice.  It may make CEOs happy to axe more local announcer jobs, but it sure isn't making the audience happy.  And it begs the question about who will be on the radio a decade from now if we're not investing in building a radio farm team. 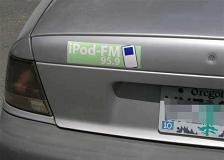 The audience sees through this, and it weakens the connection they have with area stations who they once proudly displayed on bumper stickers, T-shirts, and hats, but now would rather wear "Tommy Hilfiger" or a swoosh on their chests.

So is there really any value to investing in local assets, DJs, community relations, and truly providing a service to both area listeners and area advertisers?  Has it all been reduced to merely being about creating entertainment commodities?  Because if that's the case, radio is going to have problems competing globally.

We've seen the impact that Sirius XM can have with gazillion dollar talent budgets and millions more to spend in television and magazine marketing.  Yet, even with that monster spending, they are becoming less and less a part of the larger entertainment experience.  At the recent Canadian Music Week conference, researcher Jeff Vidler unveiled some preliminary research from a 3,000 person web study his company recently wrapped up.  It shows satellite radio running out of steam, particularly when compared to Internet based music offerings.

Our new Tech Poll - with more than 25,000 in-tab respondents from around the U.S. - will show the same thing.  Satellite radio - despite the noise, the relentless spending, and Howard Stern's recent antics - is stalling out at the same mediocre percentage it has owned for a few years now.  And customer satisfaction and intent to continue to subscribe continue to dip.  A comeback for the auto industry may provide a momentary band aid, but stopping the cancellations of subscribers who refuse to put up with one more monthly entertainment payment is a daunting challenge - especially given the rapidly expanding Internet choices, many of which provide control, variety, and no fees.

So how does the lowly local station compete in this rapidly competitive space if not to refocus on what put them on the map in the first place?  Because if they don't turn their attention to their own turf, there are big entities that are gunning for their valuable local real estate.

And they want it badly.

Tomorrow we'll look at some new competition for the local space, and we'll discuss what local stations can do with what's left in the tank.