« What Happens In Vegas | Main | The Community »

In 1995, Tiger Woods played golf for Stanford and Nike had zero presence in the golf world.  One year later, Nike cut a deal with the 21-year old PGA Rookie, and now the swoosh is the fastest growing golf brand, posting revenue of $725 million in 2008.  Nike pays Woods around $20 million a year to endorse Nike Golf products.

Shortly after the scandal broke, Nike stated their firm intention to stand by their relationship with Tiger.  Last Wednesday, with the most-anticipated Round-1, Hole-1 tee-shot in Masters history less than 24 hours away, Nike unveiled a new 30-second TV ad.

If you somehow missed it, it's raw, black & white, with just Tiger's stark visage staring into the camera, lacking his trademark confident glare.  Then you hear 33 words in the fatherly, measured cadence of the late Earl Woods, Tiger's dad.

Two days on the Nike YouTube Channel and 2 million hits.  Along with this, there are several opinion polls in the field, most of which conclude that the ad is tasteless and does nothing to rehab Tiger's image.  And of course, they have nothing whatsoever to do with Nike products. 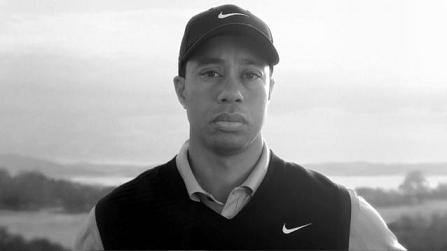 But consider that over the years, the vast majority of Nike TV ads didn't sell any specific product.  Instead, they create image while subtly promoting the Nike brand.

Without Tiger Woods, there is no Nike Golf.  And while Gatorade, Accenture, and AT&T bolted, Nike waited… and waited.  And now in an effort to not just save their golf business, but see it grow on the other side of this scandal, they are doing something brilliant.  Nike is taking charge of Tiger's off-the-course image-rehabilitation project, in a way that not even his handler's have been able to accomplish.

If those polls had overwhelmingly revealed the Wieden & Kennedy Agency-produced ad was indeed an "image-fixer" and in "good taste," then consider the ad a failure.  Tiger's situation has been the very definition of raw shock and controversy.  Any attempt to address and turn this situation should also be controversial and direct, while promoting reflection, rehabilitation, wisdom gained, and honesty.

In short, this ad concept is simple, and simply brilliant.

The next time you hear some expert insist that every second of on-air or visually-based imaging, branding, or marketing be strategic or tactical, remind them of this campaign.  Of course, there is a need for many products to take a linear, benefit-driven approach.

But sometimes, you need to Just Do It.

In this case, that means be honest, take an unpopular stand, and say what no one else will say.  The parodies, the buzz, the water cooler talk - that's what viral is all about.  Even if you know it will piss a few people off.

For some parodies, see below:

When the player opens, click the line that says "Loren and Wally Tiger spot."