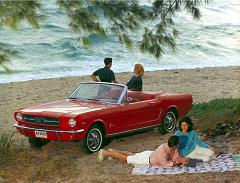 The guy who designed the Ford Mustang, Donald N. Frey, died last month.  The New York Times notes that in Mike Mueller's book, Mustang: An American Classic, he talked about the frenzy that original pony car made 46 years ago this month:

"Estimates claimed as many as four million people pushed their way into Ford dealerships that weekend alone...The few Mustangs on hand were snapped up immediately and another 22,000 order were placed on April 17 alone."

That kind of thing just doesn't happen anymore in our "Long Tail" world.

But it actually still does. 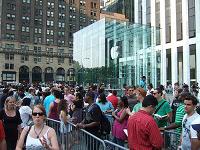 When the iPad hit the stores last weekend, a similar scene played out at Apple Stores all over the country.  As usual, the master of the tech universe, Steve Jobs, engineered another on-site frenzy, not to mention an onslaught of media hype that totally overshadowed the Final Four Weekend. (Unless you were a Butler fan.)

But that's nothing new.  Jobs has pulled this off time and time again, with the release of the iPod, iPhone, and other devices that capture the imagination of a jaded public that thinks it's seen everything.

And left in the dust are perfectly other great products that just cannot break through.  Remember the debut of the Palm Pre, totally drowned out by the updated iPhone that same week?

And Newsweek columnist Daniel Lyons reminds us that another quality product is losing near-total public attention because of Apple's PR histrionics - Windows 7. 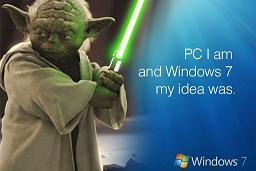 That's right, little old Microsoft just can't get the spotlight on its much-improved operating system.  (OK, anything after Vista would have been an improvement.)  And there's no shortage of marketing dollars and clever commercials coming out of Redmond to promote Windows 7.

So why do consumers go crazy about the release of all things Apple, and yawn when Microsoft actually does something well?

Let's set aside Apple's effective marketing machine for a second and focus on the quality of product argument. Apple consistently delivers devices and software utilizing innovative user experiences and a very unique esthetic that work beautifully first time out of the box. (Yes, there are often a few bugs in 1.0 of anything, but they're addressed with finesse). Conversely, announcements like Windows 7 are usually an answer to a problem; in this case, Vista. While Microsoft is busy cleaning up blunders, Apple moves forward.

Think in terms of restaurants. Which eatery would you rather frequent: the one that gets your meal right every time (albeit at a cost) or the decent yet drab one where sending back your steak because it's too rare is the norm? It may come back close enough to "just right," but a culinary sin has already detracted from your enjoyment.

As for the Palm Pre and Pixi, two great phones that should have secured a solid number two position in the smartphone market, I suggest you research some of the quality faux pas and blunders that have plagued the devices.

Like the total lack if an app strategy for those "great phones" by Palm? Thanks for the comment, and please check out tomorrow's post where the conversation continues.