It's A Small Valley

LinkedIn CEO, Jeff Weiner, has spent nearly a year with that business-oriented social media site, which has amassed 65 million users.  While that pales in comparison to Facebook's 400 million members, LinkedIn has made a mark.

Personally, it's a site I don't use very often, but then again, I haven't had to look for a real job in quite a number of years.

But as a means to find talent or great people for companies we work with?  There's clearly something here.  Our new Tech Poll VI shows that LinkedIn profiles have doubled from year to year.  Today, nearly one-fifth of our respondents have profiles on LinkedIn, especially Alternative and Triple A fans.

In a recent interview, Weiner reminded me of the importance of connections, staying in touch, and helping others.  Talking about the world of Silicon Valley, he pointed out "that it is a small valley.  What it means is more likely than not, you are going to run into the people you once worked with.  It's always helpful if you maintain relationships and connections and help whomever you can."

Social media or not, there's much wisdom in that statement.  And it brought to mind the importance of getting a break.  These days, there are many former radio people who have been out of work for some time, struggling to find a place in a changing industry.

Sometimes people just need a break - whether it is early in their career or at one of those crossroads points.  It got me to thinking of people who have given me a break over the years - professionals who took a chance on me, perhaps at a time when things weren't as rosy as they are today. 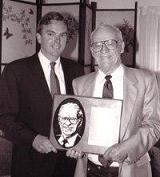 One such person in my life was Bob Ottaway (pictured with legendary Detroit Tigers broadcaster Ernie Harwell).  Back in 1985, he owned a Class A Adult Contemporary station outside of Lansing in a town called Charlotte (pronounced Shar-LOT).  WMMQ was one of four ACs in the market - the lowest rated one.  It was actually a Detroit Tigers affiliate, so between the baseball, the Pointer Sisters, broadcasting out of a little trailer, and a crappy signal, you now have a feel for the lay of the land.

Bob's PD, Jeff Crowe, saw me speak about the Classic Rock format at a student conference the previous year.  At the time, I had Classic Rock on a couple of AM stations because no one with an FM stick was willing to take a chance on an unproven format and an unproven consultant.

I know there's been a little revisionist history during the past couple of years about who actually invented Classic Rock.  All I can tell you is that in 1985, there were no other claimers to that title other than me.  Classic Rock was a lonely island, and to say that I couldn't get arrested with the format was an understatement.  There was no success and believe me, I was a single father.

But Bob stepped up and gave me that chance.  And that risk quickly worked out well for both me and WMMQ.  Despite WMMQ's many issues, the format took off and became a huge success story.  As many of you know, it is still on the air, 25 years later, and very successful (albeit on a different frequency).  And from its success, I rapidly signed on stations in Kansas City, Washington, D.C., L.A., and Detroit.

So Bob Ottaway gave me one of my big breaks.  Who gave you yours?  Who took a chance on you when others would not?  Who saw talent in you that others didn't see?

And who might you take a chance on today?  That kid who keeps bugging you for the opportunity to get on the air or work in promotions?  Or the veteran who has been out of work for 15 months; who still has more miles in the tank and a renewed hunger to succeed once again in radio.

As the industry regains a little equilibrium, it would be a good idea to thank one of those people who helped you out back in the day, and consider bestowing a break on someone who could use a shot right about now.

That's what social networking is really all about.

From your mouth to God's ears.

Great post, Fred. Has me remembering Dan Cook of WAAM - plus, high school chum Pete Bucalo, who helped make sure Dan took notice when Pete went off to MSU. So many others along the way, and I've tried to do the same. Pay it forward, for sure. One of the best features of radio, I always thought.

Thanks Larry and Scott, for the comments. We all need to remember what got us to the dance, or in this case "who." Thanks for reading this blog, and hopefully, there will be some broadcasters thinking about "pay it forward."

Fred, thanks for the kind words. Even though Fred is very self-effacing in his recollection of the kick-off of his highly successful format, the decision was easy. Fred KNEW what he was doing. He was meticulous about it, and didn't mind making tweaks along the way as other stations litterally changed their formats to compete, ie WFMK and WIBM. It is fair to say that the radio format landscape in Lansing changed over a weekend. The format was SO POPULAR that every station was all of a sudden playing a "classic". We had service-marked "Classical Rock and Roll" so nobody dared go there. I'm an ad man and marketing is all about being different. Fred offered that choice and it was a home run. We used the Detroit Tigers franchise that the station owned...and coming off a World Champion season in 1984...we parlayed the Tigers into a springboard to launch the format to all those men who were listening anyway but left after the games. Our ad budget was zero! By the next book we were #1 in every male format with a signal that really didn't cover the Metro. Congratualtions to Fred, Bill, Paul and Andy Bloom. We had a blast! Thanks, Bob Ottaway

Remember WMMQ's sign-on with classic rock while a student at MSU. Everyone was listening to it within months. I eventually went on to work at poor signaled competitor WLNZ until it went CHR. Congrats on 25 years with the format.

As for the career break, thanks to my friend Harold Miller down in South Carolina. Gave me a job when I was out of one in 1995 and within a year, gave me the keys to the entire place and made me OM. Learned a ton and wouldn't trade the experience for anything.

Thanks, Bob, for the kind thoughts and for taking that risk. And to all of you commented and considered the breaks you got and hopefully, the breaks you'll give.