Realizing that most of you reading this blog were not in Las Vegas for the NAB and adjacent industry meetings last week, I hope this post provides some value.  I especially enjoyed another RAIN conference, hosted by Kurt Hanson, Jennifer Lane, and Paul Maloney.

The beauty of RAIN is that it attracts a diverse group of people - from Internet companies and startups to streaming radio pure-plays to traditional broadcasters - and no shortage of vendors.  Our jacAPPS division is participating in sponsorships at several of these conferences this year because we like the vibe, the attendees, and the spirit in the room.

Did I love every panel?  Of course not.  But throughout a very full day with few breaks, there were a number of standouts and memorable moments.  I talked about NPR's Kinsey Wilson in a post last week, but here are a few of some other "pearls" at RAIN: 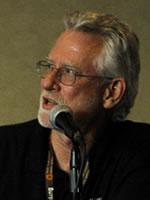 I thoroughly enjoyed the panel I was on, along with Jake Sigal from Livio and Bill Goldsmith (pictured) from Radio Paradise, hosted by Cox Radio's Gregg Lindahl.  Goldsmith is an interesting character and called out commercial radio a number of times for having too many commercials in online streams, and committing "suicide" with talent cuts and the erosion of localness.  I sometimes come across as controversial and outspoken at these things, but with Goldsmith on the panel, I didn't have to.

In one of the morning sessions, Marketron's Steve Minisini was very buttoned up in a session focused on making Internet radio a real business.  Among his suggestions - get a strategy (are you local, national, what?), train a staff (only 6% of radio reps are properly schooled), and work on your "business intelligence" - the way the data is integrated for executives and corporate types so they can understand pacing, management, and how the multi-platforms work together.

On that same panel, Adify's Leif Welch reminded the room that traditional radio already has two key assets that are central to building a streaming business - advertiser relationships and solid brands.  (I would add a strong cume audience to those.)

Of course, Pandora was represented at RAIN, the big dog in the room.  I'll have more on Pandora in upcoming posts because they are a key part of our Tech Poll VI results.  But sales guy Doug Sterne pointed out that while the lowest hanging fruit for sales is national dollars, the fastest growing revenue stream is local.  (I hope radio sales managers are reading this.)

And Katz 360's Tom Perry and ESPN's Marc Horine both reinforced the impact of streaming in the workplace.  Whether you're in a PPM or a diary market, there's no getting around the power of Internet radio during at-work hours.

In a session devoted to building online brands, BRS Media's George Bundy told the RAIN crowd that your station (or stream) needs to be on every social medium.  So start with the top 5, and "work your way down."  Bundy's other big quote had to do with how to best utilize Twitter: "120 is the new 140," meaning that if your wisdom and ideas are going to be effectively retweeted, give people enough room (characters) to add their own comments to help you get the most out of the viral power of Twitter.

That same panel also featured Blip.fm's CEO, Jeff Yasuda (pictured).  Blip is like Twitter except that instead of tweets, you "blip" about the bands and music you love.  He told a great story about how he has overcome past failures to grow Blip into a viable brand by activating fans using social media.

Kurt, as always, did a nice job with his "state of the state address."  One of my favorite visuals is Mr. Spock's tricorder, the device that essentially did it all - analogous to today's smartphones.

A true highlight was GAP's Vic Savelli, a guy who is taking a small market broadcaster into the digital age by developing a viable monetization strategy.  Savelli walked the room through GAP's before and after digital path, emphasizing the need for a new mindset, dedicated sellers, digital sales strategies, and the use of multiple platforms to create advertiser successes.  He told attendees that next year, GAP's digital revenues will surpass the company's national business.

Live 365's Johnnie Floater noted that subscription radio is alive and well, but is taking on different forms.  He pointed to streaming radio dedicated to ethnic, religious, and community groups - all pathways that can generate revenue with non-traditional programming.

And finally, a session where Chicago radio legend Steve Dahl put himself on the line to learn from a panel of experts about ways in which to grow his burgeoning podcasting business.  In this new digital environment, Dahl noted that "I feel like I'm in the right place at the right time - again."

Entercom's Tim Murphy had a solid idea for Dahl: transcribe and index podcasts to stimulate search and grow volume and distribution.  I asked Steve about the viability of contacting some of the advertisers who had made millions from his radio shows over the past thirtysomething years, and he candidly admitted that he never paid much attention to his sponsors or advertisers - much to his regret today.  He reminded DJs to pay attention to where the money is coming from - good advice for broadcast or online personalities.  Dahl is going to succeed at this next phase of his career.  The fact that he was at RAIN to learn about what's next says a lot about his mindset.

So, this is a long post, but that should tell you something about the value of these sessions for those of us in the room.  It was another reminder about the importance of the industry's need for ongoing education, and reinforced similar goals for our Summits held every year at the NAB Radio Show.  It is also healthy for traditional and new media mavens to come together in the same room to share ideas and learn from one another.

jacAPPS will be participating in Kurt's D.C. conference in September, and hopefully, many of you will be able to attend both the NAB, RAIN conference, and our fifteenth Summit.  We will also be running "Summer School" at the Conclave in July, a series of sessions designed specifically for up and coming programmers and on-air personalities.

As Kurt believes, we are now in radio's 4th "golden age," and that's a reminder that we all have a lot to learn.