On the eve of what could be a momentous launch of digital gadgetry - the release of the Apple iPad - I received the strangest email from Amazon regarding my Kindle.  It invited me to spend anywhere between $84.99- $119.99 on a sleek Kindle cover by Cole Haan. 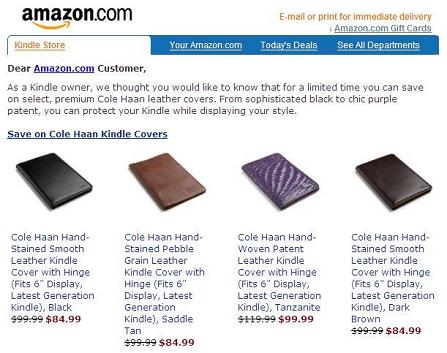 I'll tell you what - the coolest cover in the world isn't going to make my Kindle look modern.  In fact, I've been thinking a great deal about just how Amazon is going to respond to the iPad, which sure looks like it has the potential to redefine the digital reader market, along with perhaps even laptops.

I'm thinking that by the end of the year, you'll be able to buy a Kindle for $99, and that this once-breakthrough product that has been dominant in this new category, could go the way of Yahoo, MySpace, and other "first-in products" that were ultimately usurped by something cooler, smarter, and simply superior.

So at a time when everyone's attention is on the excitement of the iPad, Amazon is selling expensive covers for their dated-looking Kindle.  Go figure.

The other piece of this conversation has to do with radio.  I know that every time a new device - or in this case, a new platform - is launched, there are radio people who start thinking, "Oh great - now I have to spend more money to participate in this space." Or "We're not going to do anything in this space until we can pay for it."  Or my favorite: "Let's wait a while to see if this thing catches on."

Well, that's one way of looking at it. 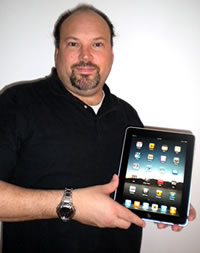 But perhaps a different view is to consider that radio - through the development of apps - can be a part of the hottest new product launch since the debut of... the iPhone.  The ability to be able to participate in a piece of technology that everyone's buzzing about is an incredible opportunity for a medium that can't seem to understand the importance of elegance, aesthetics, and the cool factor, not to mention the fact that pure AM/FM radios are rapidly disappearing from households, apartments, and dorms.

I want my medium to be able to share in some of the excitement that creates lines outside of the Apple store, covered by every news organization on this planet.  This new class of devices has the ability to spawn the release of scores of other gadgets that make it easier for consumers to enjoy print media, as well as music, video, and other content.

The iPad isn't an albatross.  It's an opportunity.

Fred, I'm curious: How much investment is warranted given that 1) if Apple were to sell 5 million units of the iPad, that would be about 1.6% of the population; 2) radio is still working to monetize streaming in general, while also trying to plan for ballooning expenses; and 3) the maintenance and content demands of apps for iPhone, Blackberry, Droid, etc. continue to mount and pull against still small budgets for web content. I agree that it's an opportunity, but how much does being "in" on the launch benefit the bottom line, in the short and long term?

All good questions. It starts out with having an overall strategy for digital - and for mobile. And every station/company is going to have different priorities, based on variables like budget, position, market size, etc. So there's no one-size-fits-all answer. I will say this - competitors like Pandora are vying to be everywhere, on every possible platform, and given that they are winning the streaming battle at the moment, that strategy appears to be working. I also believe that given the still-embryonic state of mobile - despite its meteoric rise - you cannot simply do an ROI analysis on a new space. Mobile allows broadcasters to purchase beachfront property. Whether stations can afford the upkeep is a good question. But listeners/consumers aren't going to be forgiving if they can't find you in a hot spot they enjoy. You're either there - presenting great content they care about - or they'll go elsewhere.