A new survey on consumer attitudes from Econsultancy is no surprise:

Radio ads are hated by lots of people, especially those on the younger side of the spectrum. 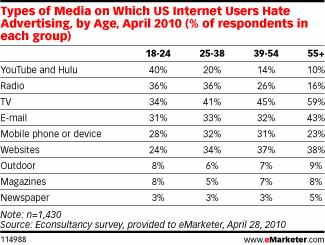 It is interesting that ads on YouTube and Hulu take "top honors," and perhaps this can be explained by the fact that most people simply don't want to see any advertising when watching streaming video.

But for radio (and TV) where ads are part of the traditional environment, you have to believe that the 1,400+ respondents in this survey were zeroing in on the quality of advertising.

This has been a problem area for radio for some time now, exacerbated by consolidation and the decline in national advertising.  For many radio listeners, a stopset often consists of six or seven :60 second ads, many slapped together locally by the same overworked production director, interspersed with bad, corny, or annoying locally produced commercials.

Of course at the station level, part of the problem is that there simply isn't enough time for one person to service four, five, or more local stations in a cluster with commercial production.

But the other side of the dilemma is the content of radio commercials.  For decades, production directors, jocks, and other station employees have been using a playbook devised when John Kennedy was the president.  Like fairy tales, these "radio rules" have been passed along through the years, whether they still are relevant or effective - or not.

So here's something to ponder.  If the user experience - including the commercials part - could be improved, what impact might that have on the medium's overall acceptance?

And how do you improve that experience?  Fewer commercials might be a place to start, and many broadcasters are slowly but surely heading in this direction.  Shorter commercial breaks might also be an avenue, and experiments like the "standalone :60" popularized by stations like WRFF/Philadelphia resonate, too.

But the piece that appears to be almost totally ignored revolves around "What makes a good radio advertisement?"  That's a question that is never asked inside radio stations, but the challenge of selling and marketing products and businesses without totally offending and repelling consumers is an important goal.

The Econsultancy study asked these same consumers about the reasons why they appreciate ads: 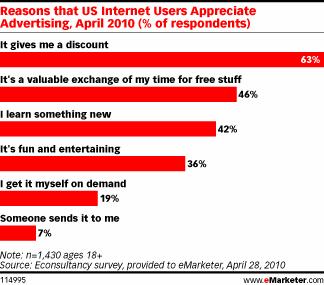 Discounts, free sampling, learning something new, and the fun factor are all elements that people say they value.  And yet, they are typically missing from most radio commercials being produced today.

The "fun and entertaining" part is a challenge, and not every commercial can pass that test.  But the ability to offer discounts or to learn something new is well within the realm of the possible - if these concepts are communicated to advertisers, sales reps, and production managers alike.

If we aren't researching and understanding how to build better ads, then we're missing a valuable opportunity to create more effective radio, while also making radio less of a "hated" medium for ads - both good goals.

Jerry Lee of B101 in Philly is the only broadcaster I've heard talk about this issue,  As advertisers move away from traditional media and test the new digital waters, local radio is going to have to try harder to bring something new to the table.  The good news is that most banner advertising and mobile ads (until Steve Jobs launches iAd) are abysmal.

P.S.  If anyone wants to send in some examples of recent great radio ads, we'll post the best.  That is, if we receive any.

P.P.S. Tomorrow (5/19) at 1:00 p.m. Eastern Time, I will be participating in a free webinar, presenting the key findings from our sixth annual Technology Survey.  It will be a fast-moving hour, including smart phones, Pandora, social media, streaming, and even Howard Stern.  It is sponsored by Triton and AllAccess, so join in if you have the time.

While I don't disagree with your general (and oft mentioned) assessment about the state of radio advertising, I don't see how you can definitively conclude that "quality" is what these respondents objected to. All I see above is a percentage of "internet users" who said they hated advertising. They didn't say WHY they hated it. I think it's a far more reasonable inference that people who hate advertising feel that way because they don't want ANY interruptions, period. Regardless, you absolutely do NOT "have to believe they were zeroing in on quality." That’s pure opinion on your part and, unless I’m missing something, is not supported at all by the study.

You don’t need to cite research to convince me that most radio ads suck. But it’s a leap to believe we’d see substantive ratings improvement if we suddenly starting insisting on better ads. Lots of people hate advertising, period … and will change the station when they hear a spot. And expecting anyone to sit through 6+ minutes of commercials if they can easily switch stations is unreasonable, regardless of the quality of those ads.

Finally: When our “harried” production people are given the freedom to write and produce ads, they’re usually pretty darn good. But they’re rarely given that freedom. The bad stuff generally comes from the agencies and clients – the people who insist on hard sells, endless price points, and including phone numbers no one could possibly remember.

Ty, thanks for taking the time to comment - and you're right - this is becoming a theme in this blog because it is a chronic problem. I believe the central issue is that most consumers will actually accept a certain level of advertising. They realize that in radio, it's the price of admission. But as you obviously concur, "most radio ads suck." The "leap" I made in the blog is based on the research because it shows that many of the qualities that consumers might value in ads are MIA in most radio commercials. And as most radio people would be forced to admit, there is rarely - if ever - even a discussion about what constitutes effective, much less entertaining ads. And it's not just about achieving higher ratings with better ads (although wouldn't that be nice?). It is about doing a more effective job for our advertisers who are now being lured away by the sheen of digital. We are in agreement that most local radio production people are capable of better. But given the time constraints and the assembly line process of cranking them out, that professionalism is rarely recognized. Thanks for your thoughts.

Great point about better ads yielding better results for clients. How often do we produce a commercial knowing it will fail? Alas, if only more clients would buy into that. But these are the same guys who insist on yet another two-hour remote to "drive traffic" to a non-"event" that no one will carea bout.

There are going to be advertisers who believe it simply "works" when they scream or talk a mile a minute. But there are others that would be open to a better approach - a commercial that combines strategic with clever. Remotes will continue to fail because they have become too numerous, meaningless to listeners, and detrimental to ratings. The smartest broadcasters have already figured out that dog no longer hunts. Thanks for reading the blog.