Staying current and relevant - values that most radio program directors will tell you are their top priorities in keeping their stations fresh.  With declining marketing budgets and staff, it is essential for radio brands to reflect the culture and what's happening in the lives of consumers.

In its own clever way, Google does this like no other.  It is interesting that while the basic look and function of their homepage have essentially remained unchanged since the beginning, they never miss an opportunity to reflect the zeitgeist or vibe of the moment.

Last weekend, Google showed off its unique ability to connect with the culture with a special tribute to the 30th anniversary of Pac-Man - a game that most of us have enjoyed at one time or another.  In a simple, yet effective way, Google takes a faceless search engine and transforms it into a fun, enjoyable moment for web navigation.  It was hard not to smile when I first opened up Google on May 22nd.

Radio used to do this well, and not just for anniversaries of album releases or rock star birthdays.  It's not that hard to think about what Greater Media's Julian Breen used to call "The Church of What's Happening Now."  Station websites and interstitial production commemorating a local moment or a pop culture phenomenon reminds the audience you are current and engaged - that everyday is not the same day.  This is another area where terrestrial radio can outshine most Internet stations - including Pandora - by simply being aware and prepared to seize the moment.

It still happens in radio - just not as often as it should.  Too often, we visit homepages of stations in a market where the local team has won a championship, and the website looks the same as it did last week.

An exception that we have mentioned in these posts before is 97Rock in Buffalo.  Programmer John Hager provides a great example of seizing the moment by melding a current-less station with the excitement that many share because of a major pop culture milestone.

This past weekend, it was a tribute to the conclusion of Lost, morphed into a "Lost Classics Weekend."  Simple, clever, and anyone can do it, right? 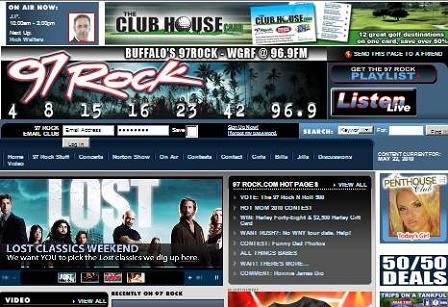 Oftentimes, we are asked by managers to explain exactly what programmers do.

This is what they do.