Throughout this past week, I would like to thank regular readers for indulging this series of posts about Pandora.  If I didn’t believe that Pandora’s ascension was significant, I would not have devoted as much space and thought to this emerging media phenomenon.

As I have pointed out over the past several days, Pandora demands our thought and attention, just as MTV did in the ‘80s, and satellite radio did in recent years.

Radio does not exist in a vacuum.  In simpler times, it really may have been about WLS versus WCFL.  Today, broadcasters need to grasp the broader realities of media consumption and consumer needs and wants in an environment of seemingly infinite options.

So let’s look at some of the results from the newest Jacobs Media Technology Survey about Pandora.  The study was fielded earlier this year across 78 rock-centric stations, generating more than 26,000 responses.  These are hard core radio listeners – the types who actually join email clubs, carry meters, and contribute the lion’s share of listening.  And their views are very germane, especially when they point to an emerging threat.

In this case, Pandora.

As our survey shows, among those who stream any Internet radio, nearly three in ten spend time listening to Pandora.  If you program to fans of Alternative or Triple A stations, that percentage moves even higher. 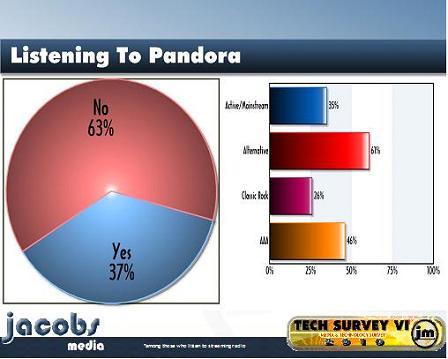 We then went on to explore how these core terrestrial listeners who tune in Pandora compare the two products.  As we’ve discussed over the past several posts, Pandora is being marketed as “radio,” in much the same way that XM pursued terrestrial radio listeners with its “Beyond AM…Beyond FM..XM” campaigns.

So putting Pandora head-to-head with commercial music radio, these core radio station database members’ opinions are clear and important:  More than half contend that Pandora is a better option for music than most commercial radio stations: 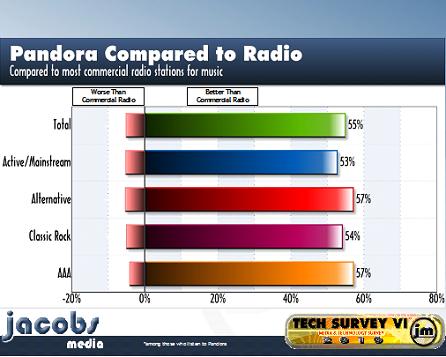 Now that’s a finding, and it speaks directly to a message we’re getting loud and clear from some of radio’s most loyal listeners.

It is important that terrestrial radio broadcasters understand the changing competitive environment, so in a follow-up question, we asked respondents about the things they don’t like about Pandora.  While many are satisfied, the lack of local DJs and hometown programming content are Pandora barriers – and local radio opportunities. 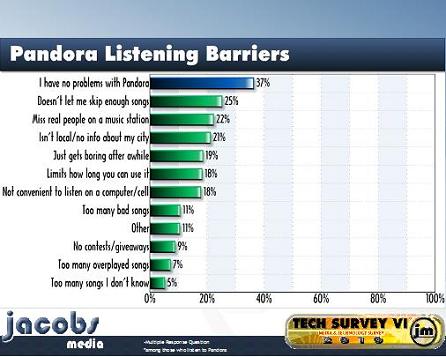 That is, if terrestrial stations are still willing to invest in the proprietary assets that put them on the map in the first place.

This isn’t about attacking Pandora or Tim Westergren.  If anything, you have to respect what he and his staff have accomplished in defining a new brand of media entertainment.

It is about understanding the new digital chess board, not creating “Meatball Sundaes,” and crafting plans and strategies that can help broadcasters better compete in the months and years ahead.

There’s a new kid in town, and he’s growing up awfully fast.

His daughter inspired him and made a pendant just like one swarovski
star in meteor shower. In the middle is a big pure diamond which is surrounded by two light circles on whichswarovski crystals
are little diamonds. Inner ring is made of gold and the outer one is platinum. These two rings can turn. This new development can be worn with a swarovski swarovski uk
chain.
We can understand the youth’s inner world and hope that such meteor swarovski diamond pendant can bring them happiness and good luck.

This is a good piece of writing mate for this particular topic. I was wondering if I could use this write-up on my website, I will link it back to your website though. If this is a problem please let me know and I will take it down right away.