Last week, Nielsen SoundScan reported the lowest number of album sales in a single week since it started tracking this data back when Nirvana was still roaming the charts.  At only 5.3 million total sales, it’s a paltry performance for an industry that is struggling to figure out how to market a product that has been around since the 1900s.

You’d think that by now they’d have figured it out.

And yet, the metrics suggest that consumers are still buying music.  Maybe there’s some confusion about exactly what constitutes a hit in this “Long Tail’ world where music exposure now resembles a weak shotgun tactic rather than developing and executing a plan that strategically introduces the world to new music, artists, and releases.

The satin jackets may be gone, but the mentality that considered them to be good marketing is alive and well.

Our Tech Survey VI indicates that the vast majority of core radio listeners actually purchase music  – whether they are the younger more adventurous Alternative lovers or fiftysomething Classic Rockers. 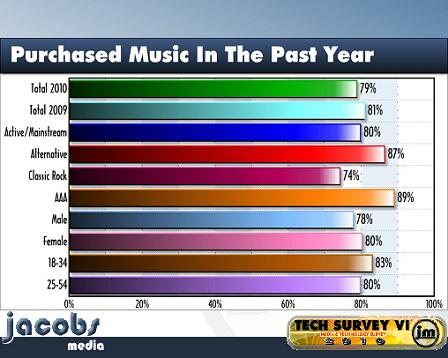 So, purchasing is still in place, and in fact, digital downloads continue to gain in popularity, but our research shows that the CD is still a viable format.

If this is true, then how are consumers being exposed to new music?  In this same survey, we asked respondents to name all their sources of music discovery.  Now keep in mind that just about everyone who took our survey is a member of a radio station email database club, so there’s an inherent radio skew to our data. 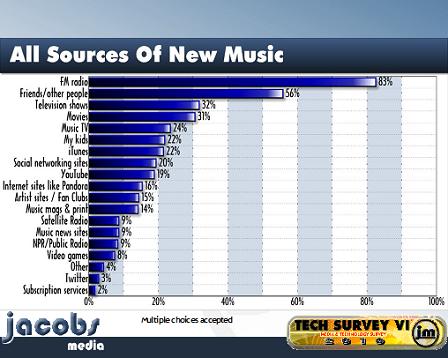 So to compensate for that bias, let’s shave off 10 or even 15 percentage points from FM radio’s big lead.  At worst, two-thirds say that FM radio is a source for finding out about new music.  Television and movies play a significant role, as do music television channels, iTunes, social media and YouTube.

And yet, the music industry is burning up a lot of promotional dollars making sure to get a new release in a football game, a TV show, or on a Sirius channel.

At the same time, the big dog in the room – radio – is criticized, maligned, and demonized by musicFIRST.  This lack of logic on the part of the music industry reveals a strategic blunder tantamount to how they allowed Steve Jobs to own digital downloads.

These weekly sales numbers suck, but it's a good bet they have less to do with the quality of music being released, and much more to do with the music industry’s shameless attack on radio, and its inability to understand basic marketing and targeting.

There are still moments of relative sanity, like Uncle Kracker recently acknowledging the power of Country radio in selling, promoting, and marketing his songs.  Crediting Detroit station, WYCD, he noted: "Country radio seems to have a few people left who take chances, and do things the way they want to do them regardless of who's going to yell at them. There still seems to be a general passion for music at the country stations I've visited." 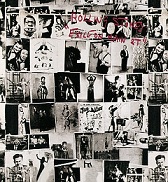 And projects like the repackaging of Exile in Main Street speak to how much promotion the labels still get organically from radio, without even trying.

Just imagine if the recording industry woke up from this bizarre slumber, realized who got ‘em to the dance, and started working in constructive partnerships once again, rather than in this kamikaze campaign against radio that is doomed.