In The Driver's Seat

Our mobile application division - jacAPPS - was fortunate to be included in a recent article in the New York Times devoted to the exploding world of in-car audio entertainment.  Written by John Quain, the piece focused on how the dashboard is becoming the epicenter of automotive attention.

We saw powerful indications of this back in '07 when our "Bedroom Project" identified how the car was rapidly becoming the last bastion of core radio listening among our 17-28 year-old listeners.

Three years later and now every automotive manufacturer - as well as many aftermarket companies - is racing to outfit car interiors with a myriad of compelling entertainment options.  For traditional radio broadcasters, the goal to be one of 6, 12, or 18 AM/FM presets has been eclipsed by the rapid increase in digital choices, seemingly growing exponentially.

Even among P1 radio fans, our just released Technology Survey VI shows that in-car iPod access is at an all-time high.  Among those who own an iPod (or similar device), six in ten now have the ability to connect it to the cars they drive.  This adds considerable pressure for radio stations to deliver a strong product in an environment that is beginning to resemble the cable television landscape. 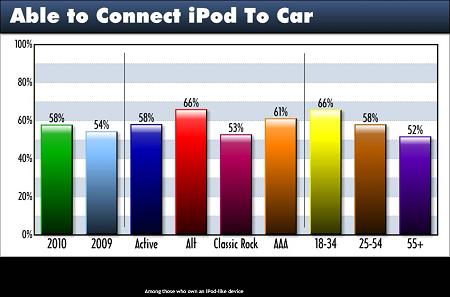 Quain points to mobile applications as an avenue for local broadcasters to play this game.  Citing efforts by Clear Channel with iheartradio, our jacAPPS station-branded apps, and Michigan-based app developer Livio, he sees a path for radio to actually expand its footprint using the car as the launching pad.

As Quain notes, "Ultimately, the incursion of Internet-based music services and radio station streams may be less about annihilating yet another business model than it is about breaking down barriers.  For the first time, small local stations will be able to reach an entire driving nation, so some broadcasters may see their audiences swell as more listeners find them on Internet-connected car radios.  In the end, it may simply be a case of radio is dead, long live radio."

Does local radio need to continue to invest in strong local content in order to keep pace?  Will radio companies have to develop applications that are prominent, clever, content-rich, and viral?  Yes, on both counts.  But the best news is that as we have been preaching since the App Store opened 22 months ago, Steve Jobs has created the means for traditional radio broadcasters to buy the hottest beachfront property on the World Wide Web.

The market has never been better for radio.

nice chart i liked it..its so clear and understandable....nice post!!