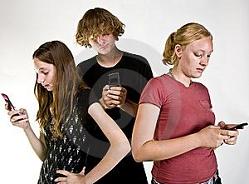 Technology is moving so quickly that sometimes even those of us who use it all the time may not realize just how our rapidly habits are changing.

The topic is about how much you use your cell phone (or better put, your smartphone) for data versus speech.  A recent New York Times article took a more anecdotal approach, but the end results suggest that cell phone conversations are taking a back seat to data usage.

In the article, Dan Hesse, Sprint Nextel’s CEO points out that “Originally, talking was the only cellphone application.  But now it’s less than half of the traffic on mobile networks.”

And the metrics from the CITA, the wireless industry association, shows that over the last two years, the average number of voice minutes per cellphone user in the U.S. has decreased.

Think about your own mobile device usage, especially if you’re carrying around an iPhone, Android handset, or BlackBerry.  The chances are good that you’re spending less time talking and more minutes texting, checking email, surfing the Internet, and other activities.

In our recently released Tech Survey VI, we isolated smartphone owners to analyze how their communications with friends and family members has changed in the past year.

For the population as a whole, texting, email, and social media usage is rapidly rising.  But for consumers with smartphones, non-speech communication is skyrocketing. 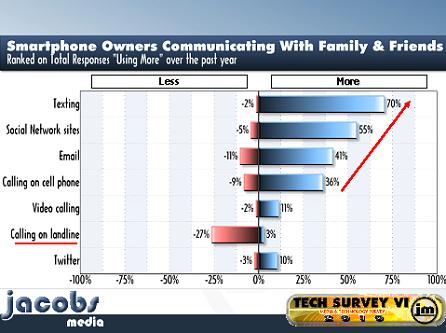 Note how texting, connecting on sites like Facebook, and even email are increasing exponentially.  And how cell phone calling has risen – but not as much.  And of course, landline calls are falling rapidly.

We are involved in another ethnographic survey that will be presented this Fall.  Like ‘07’s “Bedroom Project,” this one entails spending time with consumers and observing their real life media habits.  This new project is centered around smartphone owners.  And their reliance on these devices for data is very prominent.

Yes, they all use these devices for speech, but more often than not, they’re texting, checking Facebook or even Foursquare, banking on their phones, and a myriad of other app-based activities.

It makes you wonder if iPhone had never been intiially introduced as a phone that did lots of other stuff.  Instead, think about if Apple had launched it as a device that was essentially a  small handheld computer, like a Mini Mac.  Maybe one of its applications could have eventually featured speech communication, but the device itself would have been marketed as a small personal computer.

In that context, what’s happening with mobile devices now is more logical.  Consumers are gravitating toward data at a very high rate.  And while speech will not become passé, it will become a second tier activity on these devices, especially as they become sleeker, faster, and more sophisticated. 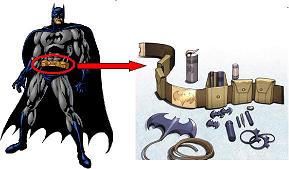 Yes, smartphones are for talking.  But they are for many more uses, too.  Kurt Hanson reminds us that these devices are much like the tricorder on Star Trek.  I see them as akin to Batman’s utility belt, except they are totally customizable depending on the types of apps you download and how you use the device.

As we await the next generation iPhone, and as Google continues its assault on the industry, the only conclusion you can reach is that smartphones are getting smarter.