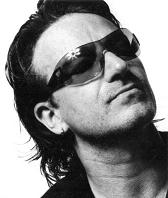 Is it possible to get big and not incur the wrath of consumers, even former fans?

After all of our years working in Alternative radio, this has been a consistent topic in focus and L.A.B. groups.  In other genres, consumers often applaud bands when they become famous and play large venues.  In Alternative, there has always been a proprietary feeling of discovery attached to bands.  If you (and your friends) somehow find them, you want to see them prosper... but too much.  If they get too big, they get stigmatized.

An extreme example is Bono.  The challenge that has faced U2 for decades has been how to maintain a cutting edge persona, while also dealing with the fame and power that comes with being one of the biggest bands ever.  As Bono has personally become a force for world peace, he has also opened himself up to criticism for getting too big, too powerful, and perhaps even veering too far away from his cultural center - music.

That happens to companies and corporations, too.  It is fascinating to watch how Apple - the David to Microsoft's Goliath in the computer world - is now facing some of those same "evil empire" perceptions up against the Google Android platform.  And it's almost unfathomable to somehow view Google as an underdog.

But in the world of mobile, that's been the case.  It is not difficult to find all sorts of blog and online venom aimed at Steve Jobs and Apple because of perceptions that iPhone is too big or that the App Store is too controlling.  In mobile, many bloggers and pundits see Google as the more open, developer-friendly platform. 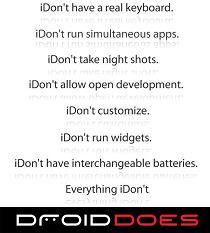 Manipulating image is part of the challenge, as Apple attacks Microsoft, and in turn, Google (Droid) attacks Apple.  While these positioning battles are aimed at the other guy's apparent weakness, it is their inherent "bigness" that is at the root of these marketing efforts.  PhD dissertations will be written about the juxtaposition of perceptions of leadership, and how each company handles their "bigness."

Right now, Facebook is grappling with the same challenge.  As the upstart to MySpace, Facebook had high school and college students at its foundation, and its upward trajectory has been nothing short of stunning.  As Facebook has experienced meteoric growth in the past couple of years, the biggest percentage change in growth has come from mature adults.

I knew something was up when my 80 year-old mother "friended" me.  I'm sure many of you have encountered that "Facebook moment" when you realized that this phenomenon was verging on being out of control.

There's now a flurry of anti-Facebook sentiment cropping up all over the web, and not just from anonymous disgruntled consumers.  Our old friend and two-time Summit speaker, Jason Calacanis, has been especially vocal about Facebook's attitude, especially aimed at founder Mark Zuckerberg:

"The biggest mistake most new players make at poker is overplaying their hand.  They spend so much time thinking of the ways they can win that they forget all the ways they can lose.  Overplaying hands can affect even the most seasoned players, especially after they've won a couple of hands in a row.

Over the past month, Mark Zuckerberg, the hottest new card player in town, has overplayed his hand.  Facebook is officially “out,” as in uncool, amongst partners, parents and pundits all coming to the realization that Zuckerberg and his company are–simply put–not trustworthy."

Now there's a new initiative popping up - "Quit Facebook Day" - scheduled for May 31st.  Its organizers are especially up in arms about privacy concerns.

A less radical approach is scheduled one week later where Facebook users are urged to simply boycott the site for the day. This group sees it this way:

"Facebook's real customer is the advertisers that they work with: NOT YOU," Facebook Protest's official statement reads.  The soon-to-be protesters also ask participants to:

Has Facebook gone too far?  Are their privacy policies out of sync?   Is Mark Zuckerberg the power hungry megalomaniac he is portrayed as in a growing number of blogs and articles?

Or is it that Facebook has gotten too big, and is experiencing some of the same growing pains that impacted MySpace, YouTube, Yahoo!, Dell, Palm, and Microsoft?

And is a cultural backlash in store for Facebook that could once again start with young people - the group that made Facebook a success in the first place?

To assume that social media is Facebook is the same faulty conclusion you might have reached if you thought Microsoft was the end-all-be-all for computer platforms, Yahoo! for search, or General Motors for cars.  There will be different sites, new portals, and still to be developed ways for communities to form and to engage with one another.  We just don't know what they are...yet.

The climb to the top is easy, fun, and exhilarating.  Staying there is the tough part.

P.S. Today (5/19) at 1:00 p.m. Eastern Time, I will be participating in a free webinar, presenting the key findings from our sixth annual Technology Survey.  It will be a fast-moving hour, including smart phones, Pandora, social media, streaming, and even Howard Stern.  It is sponsored by Triton and AllAccess, so join in if you have the time.