You Are Now Leaving Scuzball City 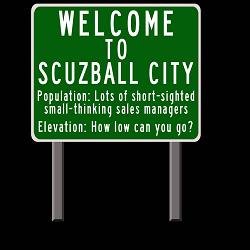 While reading the various industry trades and assorted media and digital related emails I receive every day, the contrast between a couple of them hit me right between the eyes.

In a recent Radio-Info column, sales consultant Lindsay Wood Davis called out sales managers for all those "stinking, rotten deals" that have been cut in order to get revenue on the books."  And now that the economy and the media advertising space are recovering - in some cases, quickly and impressively - there are the inevitable inventory problems popping up everywhere.  He suggests using the RAB, hiring a consultant, and using a good yield management system.

Wood calls this "Scuzball City," and his article is an attempt to get sales management teams thinking strategically, especially as the recovery takes hold.

This is good advice, and understandable given the desperate straits radio was in just a few months ago.  But in all fairness to sales managers everywhere, booking any business last year was Priority #1 so a low rate/limited inventory dilemma is not surprising given just how bad the radio business picture has looked.

But contrast radio's sales woes with Apple's new iAd mobile advertising initiative.  By placing great value on the mobile opportunity, Steve Jobs is coming at this from a position of strength.  On paper, you can discredit the iPhone space for still being relatively small in the big scheme of new media penetration.

But you can't knock Jobs' balls.  He's going after the big boys and he's putting a $1 million price tag on campaigns.  Jobs is looking for $10 million for a group of launch advertisers.  That's a lot of change for mobile ads, but Apple will do the right thing, making commercials look and feel like apps.  They aren't going to feel like those cranked out donuts that radio production guys slap together on a Friday afternoon.  And there won't be remotes tossed in for "value added."

By starting out strong, loud, and proud, Jobs is sending a message about the value of his real estate - today and in the future.

Jobs isn't selling by the numbers.  They're not that great in mobile at this early point, especially at a time when many advertisers certainly aren't spending like the good old days.

This is a concept sell.  Apple is all too aware of the CPM commoditization madness that has inflicted old media over the decades.  With iPhone, it's not about reach and frequency - it's about cool ads that function like apps.  It's about creating a great environment, and sharing the opportunity with advertisers and marketers.

A time of desperation and panic for radio was inevitable, given the way the economy tanked and the way in which radio has traditionally been sold.  Reach and frequency and cost per point don't get results.  It's about environment, packaging, platforms, and advertising vehicles that consumers notice and talk about.