There's nothing more challenging than being a huge global brand, and yet still finding a way to earn a strong reputation with consumers.  According to Forbes, a recent survey from the Reputation Institute set out to identify companies that have figured it out.

They used a multi-tiered research model that marries revenue performance and consumer evaluations to come up with their list of the great 28 - global companies that "get" the fact that reputation matters, and can be the tipping point that separates success and failure.

It also struck me as noteworthy that the Reputation Institute uses this phrase on their website:  "Creating value from reputation."  We all know about how much reputation plays into decisions to purchase a car, a computer, or other consumer product.

But too often in media, reputation and trust play a minor role in the strategic thought process.  Even in most research studies, we become so fixated with meat and potatoes performance metrics that we ignore the halo effect of having a great rep - and the trust that comes with it.

Public radio, as we've discussed in this blog before, is ahead of the curve here. They always lead with their core values, a possible reason why public radio ratings continue to be strong despite all the media competition.

So who are the most reputable companies?

The fact that Google, Apple, IKEA, BMW, Disney, and IBM made the list probably won't surprise you.

But others - Singapore Airlines, VW, Microsoft, and Carlsberg might. 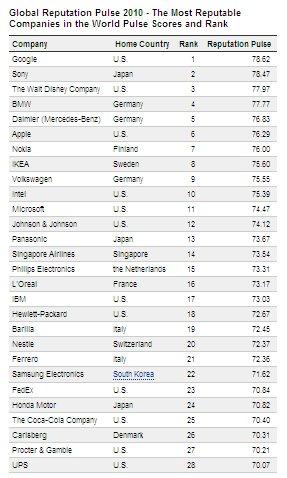 According to the Reputation Institute, there are common characteristics that help explain these standings:

Innovation - Apple, Google, and Sony's rankings emanate from their ability to think ahead of the curve with their products.  And consumers reward this forward-thinking in both revenue and loyalty.

Prestige - We all want to be associated with products that make us look cool.  That's where brands like BMW, Mercedes, Ferrero (a chocolate confections company) shine - and Apple benefits from this aura, too.

Citizenship - You may have been surprised to see Microsoft on the list because of some of the criticism they take due to reliability perceptions or just plain "bigness."  But Bill and Melinda Gates have shown the world a human side of Microsoft.

Transparency - Admittedly, this is an area where traditional media lags, while many technology companies have excelled.  Google is a good example with their decision to walk away from China (and billions of dollars in profits) based on their values.

We often hear companies talk about "best practices," and this list exemplifies brands that have a broad definition of success where reputation is always a strongly considered and evaluated quality.

Joan Jett never gave a damn about having a bad reputation...but there's a lot to be said about the value of having a good one

You think Toyota would have been on this list last year?

Curtiss, probably so. (But not BP!)