For the past 15 years or so, radio stations have been smart about aggregating email addresses for loyalty databases.  Our Technology Surveys show a consistent trend: listeners feel that being in these clubs creates a stronger bond with stations.  Given all the new media competition, this is clearly a good thing. 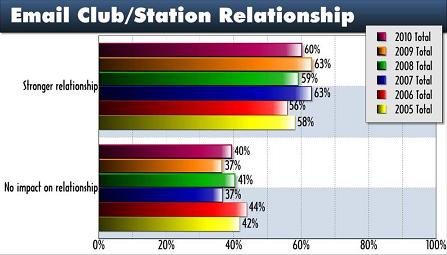 But now, thanks to new technology and some pretty smart connecting of the digital dots, loyalty goes both mobile and social at the same time.  This idea of the phone as your wallet (or in Japanese, osaifu keitai) has been in place in other parts of the world for years.  Now it's coming here, and the possibilities are breathtaking.  Loopt and Foursquare are two companies that have integrated location with social media connectivity, and now loyalty marketing becomes a big piece of that equation. 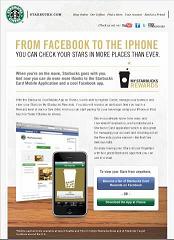 The end result is that your phone becomes your "club card," allowing you to make purchases, accrue points, and win free stuff.  Starbucks is moving into that space right now, a perfect application for a multi-location chain of stores that is fighting lots of new competition in McDonald's, Dunkin' Donuts, and other coffee players.

And of course there's the ubiquitous Facebook connection, allowing members to check their point levels on their phones or on their Facebook profiles.

For radio, there's an extra connection - at least potentially.  Station apps could contain client coupons - something that consumers most definitely desire.  And the added benefit to advertisers is radio's singular ability to drive app downloads, new loyalty club signups, and awareness for retailers who participate.  No one does this better than radio.

Some smart radio companies have responded to this recession by bringing together listeners and advertisers in the form of discounts and coupons - a win-win-win game for all involved.  We have been preaching discount programs to clients' stations over the past couple years, backed by our Technology Surveys, designed to identify opportunities and threats to radio.

This week, Tom Taylor wrote about 10localcoupons.com, a service designed to take advantage of a trend that Borrell now identifies as being a prime opportunity for radio broadcasters.  That combination of cume, brand trust, and local connections with retailers sets up radio for a prime revenue generating opportunities with its thousands of database fans.

As we continue to point out each year, whether it's downloading coupons on a station site or having them sent to you, consumers love the concept of their stations hooking them up with great deals. Now with the merger of smartphones and social media, that relationship just got more attractive.

There's more to making revenue and building brands in 2010 than celebrating an apparent recovery and selling more :30s and :60s at higher rates.

It's about confluence - bringing together brands, gadgets, and digital media that work for sales, programming, and yes, even consumers.

Radio can be a player in this space.