« Perfect | Main | The Toothpaste Is Out Of The Tube »

This past weekend, the world of sports lost perhaps one of its most legendary icons - John Wooden - who passed away at the ripe old age of 99.  Last fall to commemorate that birthday, we posted the following blog, reposted this morning in his memory: 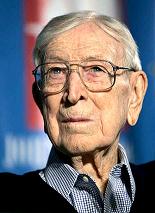 Earlier this week, former UCLA basketball coach, John Wooden, celebrated his 99th birthday.  Now for some of you too young to remember Coach Wooden's accomplishments, let me remind you that his Bruins teams won 10 NCAA championships (making those office bracket pools pretty predictable), and seven of those national titles in a row.

But Wooden's more meaningful contribution may have been in his personal impact on his players, as well as on those of us who have benefited from his teachings through his books and quotes.  One of his old Bruins players, Andy Hill, has become a Wooden disciple and has made a second career by espousing Coach's philosophies.  His book, Be Quick But Don't Hurry, became a favorite in our office because of its obvious analogies to our business dealings.

A number of years ago, Andy was a Summit speaker when our conference was held in L.A. as part of the Radio & Records Convention.  A former TV executive, Andy's motivational speaking has helped bring Coach Wooden's ideas to many corporate managers.

I thought that in acknowledging Coach's 99th birthday, I'd leave you with a few of his better quotes, and ones that we can most definitely apply to the way we view our jobs and our stations today.

"A coach is someone who can give correction without causing resentment."

As a guy who managed sports egos, this advice translates so well to managing air talent.  It's a fine art to be able to dispense advice and criticism in a way that is accepted and adopted. 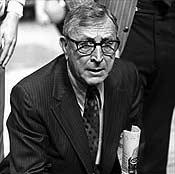 It's like Coach knew there would be a Great Recession.  While many of us are hampered by conditions that are outside of our control, it sometimes gets in the way of the tasks and accomplishments that we can achieve.

"It's the little details that are vital.  Little things make big things happen."

It's so easy in these challenging times to drop some of the small balls, but of course, they impact the big picture items.  I thought of Steve Goldstein's "Brilliant At The Basics" mantra when I read this quote.

"Failure is not fatal, but failure to change might be."

And this from a guy who won all those championships, and could have easily gotten into the "But we've always done it that way" rut.

I saved that quote for last because it speaks volumes about the road ahead in media and specifically, radio.  It is easy to stay married to a familiar and comfortable past, but a little discomfort is a small price to pay for forging ahead, looking at your world differently, and not being afraid to change.