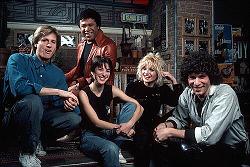 Forget about having a tight board, good pipes, and 3rd class FCC license.

According to USA Today, MTV is in the process of redefining the VJ, and of course, social media is at the center of this initiative.  Now known as a Twitter Jockey or TJ, the search is on for someone who “gets” social media and is skilled in the new art of audience connectivity.

Realizing that the world around them has changed, MTV now wants to find someone who is “dynamic, engaging and energized, an enthusiast within the social media world,” according to their GM, Stephen Friedman. This new TJ will have presence throughout the network, reporting on MTV events, while keeping in touch with their fast-moving audience.

While it all sounds like another MTV stunt, the fact is that traditional media outlets all have to redefine the role of talent and their ability to engage consumers and communities.

For radio’s youth appeal formats, this makes a great deal of sense, especially as traditional air staff members often struggle to either grasp the new tools or find themselves perplexed by messaging creation and content.

As we continue to remind radio broadcasters who may be reluctantly moving away from top-down radio and now need to tap into the viral and transparent nature of their listening community, stations have cumes and they have viable brands.

A TJ addition to the staff might be that catalyst that turbocharges the digital transition and spurs a new era in audience building and engagement.