The news that Eminem is back with a new album is music to Motor City ears, as well as his long time legions of fans around the globe.

The hype machine is already gearing up by pre-releasing photos of the album's cover.  And that news might surprise you right there. 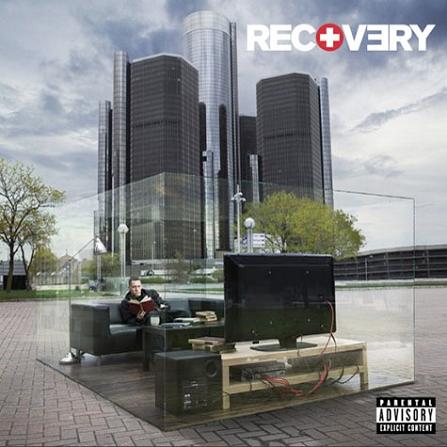 At a time when most consumers think about faceless 99-cent downloads, the always fascinating Eminem comes at us with some art to ponder, courtesy of British photographer Nigel Parry.

The new album (being released one day early on the 21st) is called Recovery, and a look at the album art suggests many themes.  Is it about his recovery?  Or Detroit's?

What does the glass box say about the trials and tribulations of celebrity?  Or is it about transparency?

That's the "Renaissance Center" in the background - a symbol of Detroit's former hope, but now the home of General Motors.  And the area where the photo was shot - Hart Plaza - is deserted.  Another statement about Detroit?  Or Eminem's life?

That's the fun part of great art - or in this case, album art.  It gets you thinking.  And it's reminiscent of some of the classic album art that used to accompany some of the music many of us Boomers grew up with.  It wasn't just about the songs - the artwork was part of the package.  And when it was beautiful, eye-opening, compelling,mysterious, or even shocking, it added something very special to the project itself. 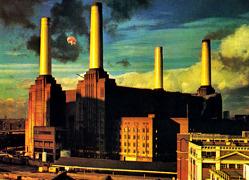 When I saw the Recovery art, I immediate flashed back to Pink Floyd's Animals, another bleak urban statement that got us all thinking more than three decades ago.  Many of those album covers were lovingly designed by Hipgnosis, a team of British artists who worked under an odd payment structure - they asked bands to pay what they felt the art was worth.  By the way, Hipgnosis also created the artwork for Dark Side of the Moon, Dirty Deeds Done Dirt Cheap, Houses of the Holy, and scores of others.

The confluence of the art - the music, the album cover, the sleeve, the label - was all part of the package that fascinated, delighted, and even puzzled.  And it was that combination that contributed to making the music classic and a major part of the pop culture of the times.

For Eminem to bring a piece of that back in 2010 is "old school" as they say, but perhaps a step in the right direction toward de-commoditizing an industry that is in dire need of some inspiration and energy.

Got any favorite album art of your own?  Feel free to comment.