I was honored to speak at the Non-COMM music industry conference last week, an interesting collection of Triple A stations from both the public and commercial radio sectors.  Produced by WXPN under the able guidance of Bruce Warren and Roger LaMay, this conference is a mashup of PDs, Indie bands, label people, and promo folks who come together annually to celebrate the joys of new music.

The Non-COMM Convention is now held each year at the famous World Café, an incredibly cool venue that hosts hundreds of concerts each year in Philadelphia.

I presented our second Public Radio Tech Survey with a Triple A-ish focus.  It was challenging and rewarding to show this data to a group who while comfortable listening to new music focused their attention on analyzing audience tastes and digital usage. 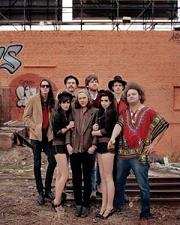 Before doing my slide show, I had the pleasure to spend a few minutes with members of The Constellations, an Atlanta-based band that performed live just before lunchtime.  We talked about touring, the challenges of playing in front of “industry types,” festivals, and a myriad of topics.  The band played a great set and provided a positive reminder of the challenges that emerging acts have in breaking through – even at a time when the digital options and entertainment sources are plentiful.

At a time when PPM pressures are pushing programmers to get safer and to speak less, stations like the ones at the World Café play an important role in the diversity of the terrestrial radio pie.  Yes, there’s room for Jack-FM or the hot new CHR.  But we’re better off as a medium when these kinds of swashbuckling stations can survive and thrive, too.

Part of the onus these stations often bear is to justify their positions beyond ratings – to listeners, advertisers/underwriters, and the local communities they serve.  On the public radio side, there’s the added challenge of extracting dollars from listeners who enjoy their content enough to pay for it.  Satellite radio has struggled in this endeavor – public radio has a better track record for making it work.

But marketing these stations as viable environments where the right types of advertisers, corporations, and businesses can glean value is the challenge.

So it was good to see – and hear – some vibrant signs at the Non-COMM conference.  And good luck to those Constellations!

Thanks for presenting and for joining us this year. Glad you dug the Constellations! Now, Up Those Spins on them, will ya? :)