The problems besetting the nation's newspapers are well-known.  Between iconic daily newspapers going out of business, moving to Chapter 11 status, or just becoming less viable as purveyors of local journalism, this industry is in a world of hurt.

During the past two Jacobs Tech Surveys, we have trended regular newspaper readership (3-4 days per week) - print and online - in order to better understand just how far things have fallen. 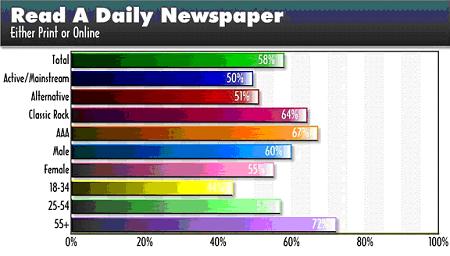 While nearly three-fourths of those in the 55+ age group are still regular readers, that level drops well below the 50% mark among 18-34s.  It's a sign of the times.

But what's happening to newspaper readership has financial implications on the entire media business, because in many cases, circulation drops at some of the biggest newspapers in the country are now calling into question the Fourth Estate’s ability to effectively function as advertising media.

Thanks to Arbitron's Tony Hereau, we took a look at daily circulation versus daily cume in markets throughout the U.S.  In each case, we isolated the top cuming radio station and compared it to daily newspaper(s) in the same metro.

The results are revealing.  In looking at the Top 20 markets, in only three - L.A., San Diego, and Tampa/St. Pete - do daily circulation numbers beat the daily cume of the most listened to station in town. 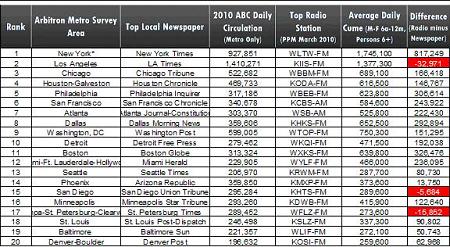 The sales implications here are self-evident but radio reps are battling dated perceptions and are often doing so with inferior tools.

There are stories to be told as the changing sands of media usage demand that we all view the landscape through a new lense.

And in the process, do a better job of selling radio's inherent strengths to advertisers who continue to tell us they're in search of better efficiencies and accountability.

You have to stay on your toes if you expect to succeed in any type of sales.