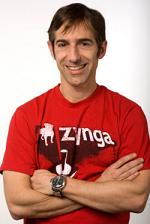 If you think some people in your station or office are unproductive because of an addiction to computer games or Facebook, the combination of those two - FarmVille - is probably the culprit.  The creation of Zynga CEO Mark Pincus, Farmville is an amazing Facebook game that has now sucked in more than 70 million monthly players, vying to create virtual farms using digital tractors, animals, and other tools - all of which are on sale.  According to USA Today, FarmVille generates lots of revenue by selling these virtual goods to players.

Now, FarmVIlle is available on an iPhone app, so there's no telling just how distracted players will be in restrooms, cars, restaurants, and all the other places people use their mobile phones.  And if you're thinking that we're just talking about kids playing FarmVille, the average user is a 43 year-old woman, an amazing stat that underscores the changing nature of digital revenue, as well as the stereotype of the "typical gamer."

Maybe the most impressive thing about FarmVille is the philosophy of its creator, Pincus.  While you've been running music logs, re-forecasting this quarter's revenue projections, or arranging the weekend air schedule, some estimate that Zynga may be worth $3-5 billion. Despite these obvious riches, Pincus isn't interested in an IPO or cashing in any time soon.  As he points out, "We're focused on building a long-term sustainable consumer service.  That's our mission."

Smart guy who knows more about customer satisfaction and building successful businesses than many of the experts selling those services.

FrontierVille is next, a Wild West themed game.  Maybe RadioVille is in the planning stages.

Fred, love your Radioville, and "I'm game" aspect. My 13 yo has been on Farmville for a while. I wasn't a fan of it till I read your blog. Can we make radio fans from listeners creating their own WKRP? What a fun thought. Thanks.h

Thanks, Hans. Building your own radio station with jocks, a morning show, and station vans might be fun for those outside the business. Wonder how much account executives would cost? :-) Thanks for the comment.

The price on account Executives has not changed in decades! They are still a dime a dozen!
Jim C