S’plain this one to me:

One of the most incredible web success stories of all time.

And one of the most disliked companies on the Internet?

According to a new University of Michigan American Customer Satisfaction report conducted with ForeSee Results, Facebook ranks in the bottom 5% of privately held companies included in the research.

Larry Freed, president of ForeSee Results notes, “Facebook is a phenomenal success, so we were not expecting to see it score so poorly.”

Based on interviews with 70,000 customers, the survey’s authors theorize that frequent changes to the Facebook site, navigation and functionality issues, privacy concerns, and the advertising creep are affecting the user experience in a less-than-positive way.

Facebook only managed a 64 (on a 100-point scale) in contrast to Google (80), Wikipedia (77), and YouTube (73).  Shame of shames, Facebook just nosed out MySpace with a score of 63 – another ragged showing for consumer satisfaction. 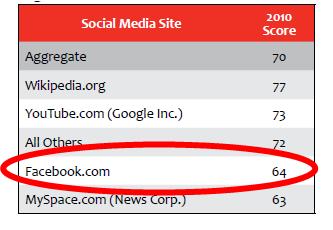 And the backlash could get worse.  While at a recent showing of Inception, I saw a trailer for a new film called Social Network, which is the Facebook story.

While you don’t get the full measure of a film in a 2:30 trailer, it’s hard not to get the feeling that there could be some shark-jumping attitudes toward the social media Goliath if this film achieves pop culture success.

Facebook wouldn’t be the first mega-company to hit rough waters by focusing more on its mission and goals than the consuming public.  General Motors, Clear Channel, Microsoft, and other major league brands have done their share of suffering. 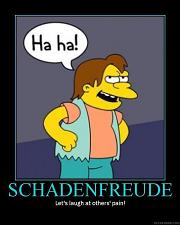 And you know that while MySpace isn’t much better off and continues to struggle with its own social media definition, there had to be just a little schadenfreude happening when these satisfaction numbers were released.

Of the 30 online companies measured in the ACSI, Facebook and MySpace ranked at the bottom.  And as a category, social media networks were just above the airlines and cable/satellite TV companies.  Ouch.

As Facebook passes the 500 million mark, and continues to sign up new users around the globe, the paradox of massive membership and deteriorating customer satisfaction will continue to be discussed.

At our Summer School sessions at Conclave earlier in the month, Ralph Cipolla from our company put together an on-point customer satisfaction presentation.  A section of it was based on a recent Forbes.com study of some of the world’s most reputable companies.  Characteristics like transparency, responsiveness, philanthropy, accountability, and a set of core values often described these companies.

So as you think about Facebook, how many of these attributes come to mind?

This U-M survey ought to be a message to any brand that has achieved #1 status that the fun part of the ride is the climb.  Staying on top is the true accomplishment.