Music To My Earbuds

A fresh-out-of-the-research-oven survey from the Pew Research Center confirms what’s happening in App Land, and backs up this year’s Jacobs Media's Tech Survey VI: More smartphone owners are downloading music-centric apps.  And this is great news for broadcast radio.

Pew notes that a third of mobile phone users now use these devices to play music, up from 21% just a year ago. 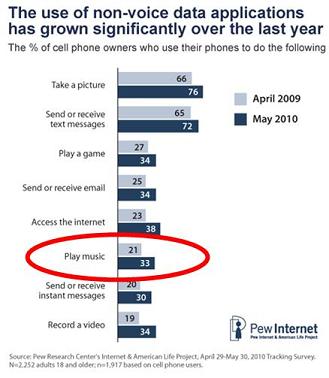 And here’s the bonus – all of this usage is heightened by the young end of their survey respondents.  Isolating the 18-29s, nearly two-thirds of them listen to music via mobile applications.

There are lots of implications for those of us who make our living in broadcast radio (and maybe satellite and HD radio, too, eh?):

1. More and more, iPhones, Droids, and yes, even BlackBerry devices are the new Walkmans.  We've talked a lot since conducting research for Arbitron several years ago that revealed how radio had lost its portability.  Today, broadcast radio has cool devices from which consumers can enjoy its content while they're on the move.  (And while it would be wonderful if Steve Jobs turned on that alleged FM chip in iPhones, with apps, it really isn’t all that necessary.)

2. Unlike a Walkman or a conventional car radio, apps provide stations and personalities with a myriad of content options.  Podcasts, games, artist/song identification, videos, concert and events schedules, alarm clocks, and other features that enhance radio brands within applications are all part of the package.  The best you get from most car radios today is strange RDS gobbledygook.

3. Smartphones skew young - at least for now.  That doesn’t mean that all those college-aged users and twentysomethings are simply going to gravitate back to terrestrial radio, but a cool app that provides strong local content, personality, events and concert info, and other resources – for free – can help re-energize a station.  For a medium that struggles with attracting 18-34s, apps are an avenue to help get radio back in the game.

4. Apps are popular among certain ethnic groups.  Pew also reports that African-Americans and English-centric Hispanics are even more app-focused than Whites.  Given the way the population is moving, applications provide yet another avenue for radio brands to expand their footprints, especially in markets that are skewing ethnic or for companies that feature these types of formats.

This fall, we are excited to be presenting the results of the newest ethnographic study that we’ve put together with Arbitron – “Goin’ Mobile.”  This project focuses on smartphones – how they’re used and how they’re changing lives.  We’ll unveil it at “The Radio Show” in D.C. and it will confirm and expand upon everything we already know about how these small handheld devices have changed everything.

I have said it at countless conventions, conferences, and panels over the past year:

The iPhone (and similar devices) is the greatest branding tool of our time.

And the ability of apps to launch new brands, re-energize existing ones, and to provide “beachfront property” on the desktops of the hottest gadgets of our lifetimes ought to be enough incentive for radio’s leaders in the highest echelons of our business to take note and take action.