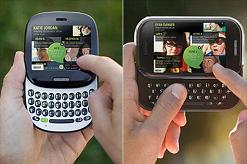 How do you know when an experiment just isn't going to work?

And when you figure it out, how much time do you give it?

We've all seen or been involved with "still birth" formats and morning shows that were sadly destined to fail.  Is a year too much time - or is it not enough?  Is six months too reactive?

With fewer than 10,000 phones sold, the writing was on the wall.  If you give Microsoft credit for knowing a dog when they saw one, you have to wonder how a company of this size and importance in the technology world simply cannot work its way into the smartphone business.

New York Times reporter Ashlee Vance chalks it up to a larger Microsoft problem - not being in touch with America's youth.  Outside of the Xbox line, Microsoft has a bad track record for creating products that have any appeal to young people - the demographic and psychographic that dominates the tech world for software and hardware development and innovation.

But when you think of Microsoft, you think of stodgy, workhorse programs for the business community.  You don't think about cutting edge products that generate buzz.  When was the last time someone pulled you aside to rave about a Microsoft product?

In this same article, Tim O'Reilly, a publisher of software development guides, points out that Microsoft simply got "fat and happy."  You can understand that when the entire world is using Word, PowerPoint, and Excel.  But when the tide turns and pop culture and hi-tech move like a tidal wave, inattentiveness to youth becomes a fatal flaw.

So, you know where I'm headed.  Because an emphasis on 25-54 adults has taken radio down the same path.  By simply being "fat and happy," and printing money with adult demos, radio has put itself in the greatest jeopardy of all - not being relevant to a generation (or more) that simply gets its entertainment and information elsewhere.

Microsoft is trying.  Since late '08, it has made its business and development software available to students.  They claim that 35,000 new companies have taken advantage of their offer.

But as we also know, perceptions don't change in a year.  And while Microsoft is trying to turn the Queen Mary, Apple, Google, and hundreds of other web-based companies and start-ups have understood that successful high-tech ventures are built on a foundation of youth - not by ignoring them or chasing today's dollars.

With a new CEO at the NAB, maybe there's an opportunity for this industry to understand that survival isn't just about EBITDA or crushing the Performance Tax.