“When’s the last time an alternative station has been number one anywhere?”

That’s the question that Chris Huff, Tom Taylor’s ratings guru, asked earlier this week in his “Taylor on Radio-Info” email newsletter after looking at the Salt Lake City July book, and seeing Simmons’ X96 sitting on top of the heap with better than a 7-share.

Chris asks a good question, because the Alternative format’s success over the past two decades has been totally dominated by KROQ, and justifiably so.  But there are other burgeoning success stories, and after reading a nice piece on X96 in “The Sands Report,” it occurred to me that there’s a lot to be learned by their success – especially in a market where you wouldn’t expect the most listened to station to be a rebellious, edgy brand like this one.

(By the way, kudos to Richard Sands on recently celebrating his weekly’s 10th anniversary.  As the Alternative format has been much criticized or ignored over the years, it is enjoying a renaissance due in part to PPM, and Richard has become the format’s voice.  While he may not have thousands of subscribers, “The Sands Report” does a great job of looking at Alternative – and its main players – from many different angles.)

Saluting Todd “Nuke-Em” Noker, Richard asked him about the keys to succeeding in this market and in PPM, and here’s the big quote from Todd:

“There isn’t any conceivable way that an Alternative station – or any station, for that matter – can achieve success without programming locally, and having live, local personality events, and having personalities that own their brand and the station’s brand is paramount to having a successful station.”

There are a lot of naysayers throughout radio and the blogosphere who continue to trash the local strategy as being shortsighted or simply wrong.  And yet, talk to someone in Salt Lake City under the age of 45, and chances are good you’ll get a great X96 story.

Part of Todd’s “formula” revolves around not treating X96 like a niche player.  As he reminds programmers everywhere, “Run your Alternative station like it’s the only station you own.”

Of course, that’s good advice, whether you’re programming a Hot AC or a Sport Talk station.

Todd also told me that while X96 jocks are not under “a gag order” since PPM came to town, they work on clutter reduction and more jock break economy.  While Todd doesn’t suffer from analysis paralysis when the weeklies come out, he does looks for patterns and shares the data with his team: “I love to show this to the staff so that they know exactly how the game is played.”

X96 is a personality-oriented station, and Todd wouldn’t have it any other way.  There’s “Radio From Hell” in morning drive, along with Marci, Todd, and Corey O’Brien in the dayparts.  Like all strong stations, there’s an at-work program in place (X96 Workers Union), along with features that emphasize listener interaction and inclusion.  Marci hosts “Last Letter Game,” while Corey is the guy behind “On Demand.”  This is a cool, hip staff that is marketable – big contributors to X96’s success. 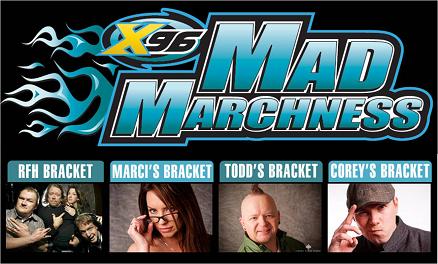 Live, local, compelling content, and connectedness to the market – all elements that contribute to X96’s success.

Among his other accomplishments, Todd is an author and he tells me that the big lesson from that experience is working with editors who have taught him that “getting the message across without being cumbersome with too many words.”

So, is the takeaway here that an Alternative station can be a solid #1 in PPM?

Or is that great local radio can win whether it talks, plays Lady Gaga or Linkin Park?

Or is that you can win in PPM without being a jukebox, and for the long haul, that’s what makes better brands?

Todd?  “Don’t try to out-iPod an iPod.  Win the battle of being a great radio station.”

P.S. We're still looking for linchpins - those hard-working souls at stations and clusters who hold the place together.  You never read about them in the trades and they rarely are in the limelight.  But they tirelessly work station events, sales remotes, and do whatever it takes to create a winning environment.  Greater Media's Buzz Knight and I are showcasing these linchpins.  Write about that person at your station/your cluster.  We have a nifty iPod Touch for the best of the bunch.  The deadline is Labor Day Weekend.  Please send them to me at fred@jacobsmedia.com.