Behind The Blue Door

The Effie Awards were founded more than 40 years ago by the American Marketing Association’s New York Chapter to recognize the most effective U.S. advertising efforts each year.

As you might expect, the competition is always formidable for these awards, as agencies and brands compete very hard to win the right to display these prestigious trophies in cases in lobbies and conference rooms across America.

According to Carl Johnson, Effie’s Chairman of the Board, this year’s awards were especially competitive, featuring advertising winners that included Apple (“There’s An App For That”), Intel, Old Spice, Gatorade, and Priceline, to name a few.

But the grand prize winner?  It’s the Detroit Public Schools and their “I’m In” campaign, featuring ubiquitous blue doors that helped reposition the school system as desirable, viable, and worth enrolling in.

This history of the DPS is grim.  As a graduate of the system and a resident of the Metro Detroit area, I can tell you that there isn’t a public school system in more dire straits than this one.  Our mayor, Dave Bing, may end up taking it over, in a city where unemployment is so high that it is essentially incalculable.  And of course, federal funding is dependent on enrollment, at a time when the numbers of students in the Detroit schools have fallen – 80,000 students in the past decade.

The “I’m In” campaign worked, repositioning the DPS as places where great things can still happen.  The result of the campaign is that enrollment jumped, generating more than $49 million in funding from a low-budget effort, at a time when the school system was facing a deficit north of $300 million forcing the closure of 29 schools in ’09.

“Our deserved winner is Detroit Public Schools who took on a challenge decades in the making,” noted Johnson. “Acting with passion and proactivity, they reversed the negative perceptions surrounding their schools with a powerful and engaging multimedia campaign that moved people emotionally, inspired them to get involved and resulted in them being entrusted with people’s most valued possessions-their children’s futures.”

And it was all accomplished with a budget of only $250,000 in paid media, along with a lot of wood and paint that went into creating 172 blue doors (the number of schools in the system) that showed up around town, including this dramatic scene in Hart Plaza on the Detroit River. 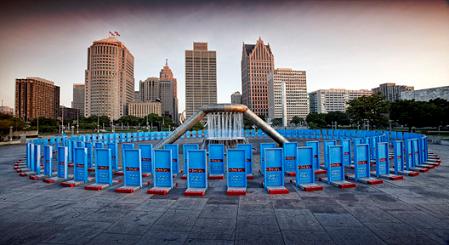 According to judges Shiv Singh and Peter Carter, the surprising choice of the Detroit Public Schools leads to five key marketing lessons:

Several of these takeaways apply directly to the state of many radio stations and brands.  The chance to provide value to listeners (and advertisers) in the form of coupons and discount programs is part of the solution especially in tough economic times.

And of course, radio’s cume audience – still very healthy and bigger than ever in PPM – has the heft to power the viability of any advertising and marketing campaign.  Now that we are building mobile apps for brands outside of radio, it has given us a healthy respect for the value of a large listening audience.  Unlike art fairs, concert festivals, and other clients that jacAPPS now represents, radio’s ability to generate downloads using its own air to get the word out underscores the fact that a compelling message can be communicated with a vital audience and can generate trackable results.

But the DPS campaign is also proof that consumers will rally around a cause or movement, if it resonates with their beliefs.  Stations often see this when a local cop is shot or Mother Nature wreaks havoc on the community.  These fundraisers are almost always successful.

But radio doesn’t need to wait for tragedy to strike if station management is plugged into what residents care about.  The power of local personalities to get behind a movement and energize people has always been there.  At a time when consumers are frustrated by their inability to make a difference, radio can be at the forefront of bettering the community by tapping into key sentiments.

Finally, the DPS campaign proves once again that big budgets are secondary to bigger imaginations.  The blue door “I’m In” symbol created an instant lightning rod that woke Detroiters up to the importance of supporting their schools.  In radio, we spend so much time and energy planning and executing bar nights and remotes that there’s precious little time or resources left to market our own brands in clever, catchy, and effective ways.

That’s my final takeaway to those of you who read this blog.  I have sat in too many “promotions” meetings over the past that were anything but.  They should be called “sales fulfillment meetings” because that’s precisely what they are.

Just because corporate isn’t funding television or billboard campaigns doesn’t negate the need for meetings and brainstorms that are designed to support, enhance, and grow the station and the brand.

There’s nothing wrong with providing value to advertisers, especially at a time when local radio needs to prove its worth.  But when it comes at the expense of the brand itself, radio is mortgaging its future value by simply not spending enough time and energy promoting, nurturing, and marketing its own assets and strengths.

Sometimes you need to get backed into a corner in order for your best work to emerge.  That was the case for the Detroit Public Schools, and their “Hail Mary” campaign actually worked.

Radio would be wise not to wait.

Special thanks to Arbitron’s Jo Bruen for the inspiration for this blog post.

Thanks so much, Dave. As a Michigander yourself, you know just how impressive this award is. Appreciate you reading the blog.