JacoBlog - Jacobs Media's Blog: Everybody Has An Audience

« I Am Woman…Watch Me Tweet | Main | A Question Of Balance »

Everybody Has An Audience

At a recent client conference, we had the chance to meet Greg Verdino, author of the new book microMarketing.  Greg’s an interesting guy who is immersed in the development of smart social media strategy.  He also is well grounded in our business, having worked for Arbitron a number of years ago back during the days when they were first trying to measure online radio listening.  Besides being an author, Greg is VP of strategy & solutions at Powered, a full service social media agency.

microMarketing is premised on the notion that you can get “big results by thinking and acting small.”  At our conference, Greg talked about the need for legacy brands to give up some control, and let the community do the heavy lifting.  He offered Coke as an example, with the illustration of their Facebook fan page, originally started by a couple of fanatics.

Rather than run to their legal department and fire off a C&D when it launched, Coke embraced the page, let the fans run with it, and rewarded them by working with the creators to build it.  As a result, this mega-brand acted human and allowed its large and faithful community to enjoy the product and to engage with one another.

In Greg’s presentation, the quote that stuck with me was when he reminded everyone in the room that “Everybody in the audience has an audience.”

That is a statement that perhaps best underscores the changing relationship between the listener and the station.  In the past, there was always a somewhat healthy fear that anyone on the other end of a request line or hanging out at a bar night could have an Arbitron diary – or get one someday.  The obvious implication was that if a station or DJ treated someone rudely or ignored them altogether, there could be some serious payback at some point down the road.

The modern version of the “what goes around” philosophy revolves around Verdino’s profound observation.  As our Tech Survey showed, when 80% of the entire Rock-based audience has a profile on Facebook, Twitter, LinkedIn, Classmates, etc., each of these listeners is connected to other people.  In many cases, maybe we’re just talking about a few dozen friends.  But in others, there could very well be thousands of fans or followers – in other words, a significant community.

But whether it’s a large group or just a handful, we’ve all seen the “power of one” many times on YouTube, Facebook, and other online sources.  Greg showed us the Sasquatch “Dancing Man” video that illustrates this phenomenon very well.  It’s a metaphor for how social media works.

Everyone in the audience has an audience. 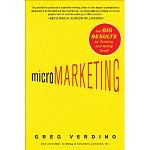 We can tap into these communities by welcoming them, giving up some control, and engaging with them. Or we can continue to post ticket giveaways on Facebook and tweet our slogans – and see virtually nothing happen.

Best of luck to Greg with the new book, and we thank him for the lesson in “microMarketing.”