Ford Has A Better Idea 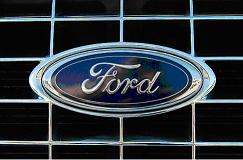 President Obama was here in the Detroit area last week, celebrating the comeback of the auto industry.  While Chrysler and GM are clawing their way back into respectability, Ford may have had the best strategy all along.

By not taking (or apparently needing) the bailout money, Ford separated themselves from the other two in a positive way.  And with their return to strong profitability, the company is leading the way forward for American car makers.

While building better quality vehicles was Job One, the U.S. car makers are also changing the ways in which they interact with their customers.  As most of you know, their historical track record in this department has been abysmal, frustrating car buyers at every turn. 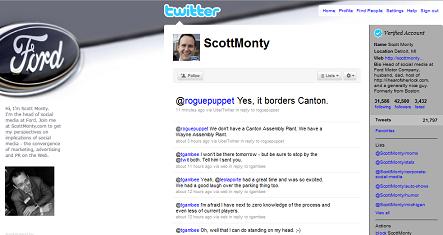 That’s how loyalty and trust are built.

(Note on Scott’s Twitter page that he has more than 42,000 followers – obviously, an influential guy who has built a large, rich community.)

It is one thing when a technology company like Apple or Amazon interacts with customers.  It is a whole new challenge for legacy industries like automakers – or radio broadcasters.  As Seth Godin pointed out numerous times in Meatball Sundae, old-line brands (or meatball businesses) truly need to step back and develop digital strategies that aren’t just reactive – like “let’s start sending out tweets because everyone’s doing it.”

One of the key differences is in engaging with customers.  Toyota was highly criticized earlier this year when they endured those safety snafus.  While they had a Facebook page that collected consumer complaints and questions, it took them forever to actually respond to these messages.

Ford, on the other hand, believes in rapid response.  Monty notes that “people are blown away that a global company like Ford…is replying to them on Twitter.  We love platforms like Facebook and Twitter where we can reply to specific questions and call somebody by name.”

I saw proof of this last week when I visited Ford’s Facebook page.  The company is currently advertising a tire sale, and a consumer – Tim Theodorou – wrote in with a complaint/comment about this offer.

Within an hour, Joanne at Ford got back with him, starting with a “Hi, Tim” greeting, and then responding to his question with information about a $100 rebate that is part of the company’s tire offer. 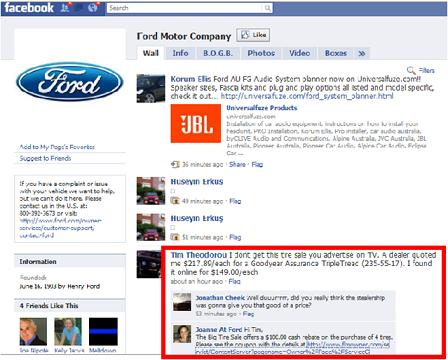 Of course, we don’t know whether the response totally placated Tim, but the fact that a real person from Ford engages so quickly with a consumer question is impressive, memorable, and even viral.

Monty sums up some of the key attributes that are cornerstones of Ford’s social media policy:

No meatball sundaes there.