JacoBlog - Jacobs Media's Blog: If It Walks Like A Duck

“We want to be in as many cars as possible. We’re beginning to embed internet radios in all the places where you traditionally have a broadcast radio. Ultimately, the choice we hope consumers make is they’ll opt for this instead of broadcast.”

Readers of this blog will recognize this quote from Pandora CEO Tim Westergren.  It’s yet another indication that Pandora is doing everything it can to kick ass and take names in its assault on broadcast radio.

In our research, our coverage of Westergren’s meet-up in Detroit last year, our “take” on Pandora’s local sales initiatives, and particularly in this blog space, we have continually pointed to its threat potential.

Now with the advent of format-branded or genre channels, Pandora continues to laser-focus on broadcast radio.  Long-time Pandora listeners know that the music discovery and depth features have been diminishing for some time now.  Pandora’s research must have shown them the mantra that terrestrial radio has utilized for decades:  “Play the hits.” 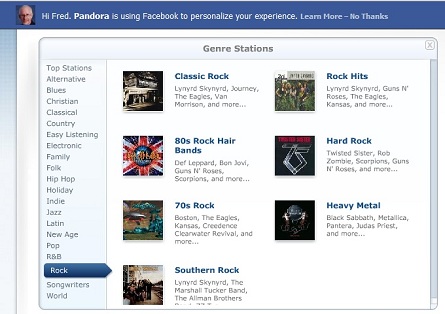 While there will always be adventurous consumers, Westergen knows they are in the minority.  The masses want it dumbed down.  They want a service that is simple, reliable and plays songs they know and love.  The most popular satellite radio channels are the ones that play the hits.

Now Pandora is moving from esoterica to mainstream.  In the process, broadcast radio is right in their crosshairs.

Yes, AM/FM radio has many challengers and groups that would celebrate its demise. But it is time to stop ignoring Westergren and Pandora, whose intentions continue to be transparent.