As we learn more about who’s using what from so much of the research that’s being conducted, from Alan Burns’ new study focusing on women to our Technology Surveys that are comprised of thousands of rockers, certain patterns are taking shape.

Women are more social creatures to begin with, which leads to the obvious finding they’re more comfortable on social media sites like Facebook.

But men tend to be more gadget conscious, so it’s also no surprise they tend to be smartphone owners.  We saw this in our recent Tech Survey, and now it’s backed up by comScore. 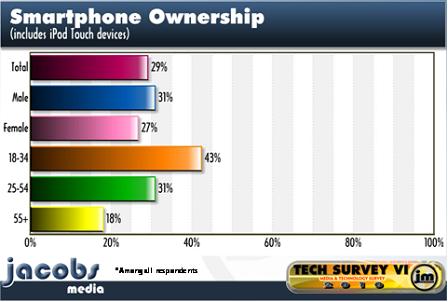 comScore suggests a bit more of a gap between the genders, but the skew toward men is pretty obvious when it comes to running out and buying that iPhone or Droid.

There are also indications that when it comes to mobile web services (i.e., apps), men are in front.  But women are more into games, ringtones, and music, while both genders are doing lots of social networking on their phones.

In the expanding area of mobile video, there is also some parity, but men spend more time watching videos.  This is another streaming medium where we’ve also seen strong growth in our surveys, leading us to strongly push for more video content on Rock/Alternative station websites – and on mobile applications, too.

These trends bode well for Rock stations as they attempt to assimilate some of the key changes that are impacting success in 2011.  On the one hand, Christmas music and play-by-play sports are distractions that create ratings pressure.  On the other, PPM tends to look favorably on well-branded, strongly programmed Rock stations.

And now with mobile being yet another conduit for great content, the world’s fastest growing, most exciting platform presents opportunity for radio’s two most important constituencies – audience and advertisers.

I can see for definite that men would go for the iPhone over an android for 9 times out of ten even if the android was the better phone. Its all about image.