In radio, we often assume that listeners know how to use us.  Of course, a standard radio is the easiest-to-use, most familiar device around – with fewer buttons and settings than a toaster oven.

But as radio has expanded to other platforms, we tend to take for granted that consumers “get” how to access us and when and where they can listen.

This has been the case with Internet streaming and mobile.  We rarely make it as easy as possible to access our stream, and too often, stations don’t “connect the dots” so that listeners know that it’s easy to tune in at work on your computer.  Or if there are firewalls or other surfing barricades in the workplace, your audience can tune in with a smartphone (assuming you have an app or an easily accessible mobile site).

When it comes to connecting those dots, no one's better than Pandora.  Below is an email we recently received from Pandora.  They've just passed 60 million signups and they acquire upwards of 30,000 new listeners a day just on smartphones alone.

As CEO Tim Westergren has noted in explaining the way that mobile has supercharged Pandora’s audience expansion, “Our future is going to be more mobile-centric than I had even thought, and sooner.” 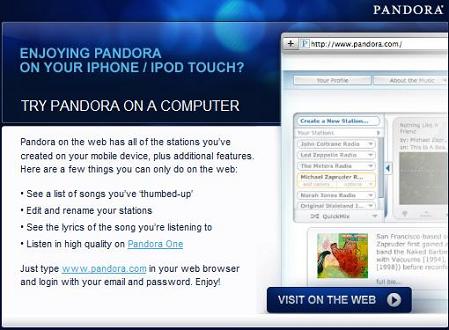 So why this apparent step “backwards” into desktops and laptops when many experts predict that global mobile phone ownership will surpass traditional computers sometime in 2012?

My bet is that Pandora’s research has revealed that while their mobile growth is through the roof, some of these iPhone and Android users may not even be aware the channel is available on conventional computers.  Or they may not know about some of the features that are being offered on laptops and desktops.  That may sound elementary, but given that so many smartphone owners have only had these devices for a short time, there is still a sizable learning curve.

By clearly spelling out how to listen and how consumers can benefit, Pandora is making it easy for its listeners to access the service – anywhere and everywhere.

This is somewhat ironic because as Pandora's Tim Westergren tells Charlie Rose in the video clip, it was the computer where many people first discovered his baby.  But thanks to the iPhone, that has changed.

Radio programmers would do well to rethink that same logic path.  Of course, consumers know how to tune you in on a car radio or that nightstand clock radio. 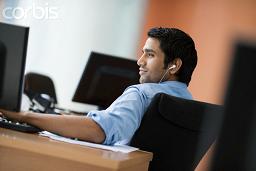 Online radio listening – on computers and on mobile devices – is very likely a different story.  How can they access you?

When are the good times and smart situations when they should listen?

At-work, when you’re commercial-free for 90 minutes?

When they’re waiting in line at a bank or in the dentist’s waiting room with their phones?

While walking or taking the train to work using that cool mobile app you just launched?

Pandora has totally blown up the notion of a cume-building campaign during the past couple of years.  They are working hard on customer acquisition and now they’re translating it into ad revenue.

Emails like this one tell us they are researching their rapidly growing audience about more than just what songs they like.

Radio needs to expand and step up its own research to better understand the changing listening environment and how new platforms are transforming traditional content and the ways in which consumers access it.

Or simply keep an eye on Pandora.  They are redefining best practices for growing audiences and increasing radio listening.