No, this post isn’t about yet another faceless variety station called “Bob.”  It’s about a living, breathing personality named Bob - Bob Lester - who can teach us a great deal about how it should be done in 2010.

That’s because for all that has changed in broadcast radio over the decades, one thing is still essentially the same:

Radio often hires air personalities using the same criteria that made sense in 1978.

Here’s an ad we mocked up for a presentation about the care, coaching, and brand-building of DJs.  These job requirements are archaic, given the needs that radio stations now have. 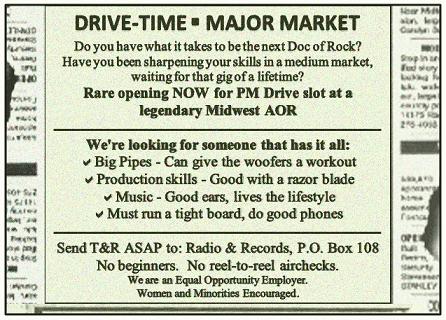 In an environment where voicetracking, PPM, and tight budgets play a role in diminishing the role of the DJ, the fact is that local radio needs strong, multi-faceted, and active personalities in order to be viable in a changing world where Pandora and iPods are rapidly becoming common choices.

We have developed presentations designed to help stations and their personalities redefine the role of the DJ in order to better contribute to the industry’s changing needs.  And along the way, we occasionally run into a personality in a local market who is making a difference. 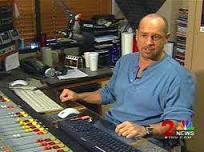 Our poster boy for this blog is Bob Lester, half the morning show at KWHL (K-Whale) in Anchorage.  While not always the case, it is probably a truism that it may be even easier and more desirable to build a strong DJ brand in a medium or small market where distractions like pro sports, Broadway plays, and great local TV are minimal or non-existent.

But let’s give Bob his due.  He is much more than one half of the morning show on his station.  He has created what he calls the “Bob brand” by adhering to one basic philosophy (especially in the early years):

In short, Bob took just about every job, opportunity, promotion, meet & greet, pie eating contest, PA gig, and remote.  Most of this was done for minimal or zero compensation.

Why do this?  In Bob’s own words, “I was able to put my talents in front of as many people as possible, hoping that eventually somebody would see me and say, ‘I need to hire that guy.’"

How did it pay off for Bob Lester? 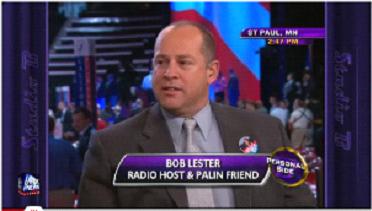 But here’s the kicker – Bob’s view of his role at the station and in Anchorage has been part of a larger ethic that has guided his career trajectory.  As he explains, “Being in radio is a huge responsibility, and one that I do take seriously.  I love this community, and the people who live here.  Giving back is all part of being part of this ‘Anchorage family.’”

We have to nurture and grow more Bob Lesters in radio because few personalities truly understand that there's more to this job than just being great on the air, hosting bar nights, and performing well at remotes.

The community connection is indeed the “secret sauce.”  Many years ago, author Emanuel Rosen spoke at one of our Summits.  His book, The Anatomy of Buzz, broke it down clearly and simply:  the number one thing that people talk about is other people – celebrities.  And this was before Facebook and Twitter.

Radio has to rethink its time-honored job requirements, and design a new role that redefines station personalities.  We need to grow local celebrities, and help them develop into brands - and people - who matter to their communities.

Bob Lester has given us a pretty good template.