« You Know More Than You Think | Main | Tipping Point »

If you need any more proof that there’s something amazing happening on the Internet right now – with Twitter and real-time web, there’s no more proof than the “140 Characters Conference” concept.

It’s about “The State of Now.”

It was started by Jeff Pulver, a remarkable guy.  He has been active on the Internet and related ventures for many years.  Jeff is truly one of the most innovative thinkers in the world of technology, and these one-day conferences are all about conversing about what’s happening right now by bringing in diverse speakers.

All of the sessions – like Twitter itself – are quick-hitters.  Many are just 10 minutes long, but they move, they stimulate, and they engage.  To date, Jeff has put together conferences in Austin (at SXSW), Barcelona, NYC, DC, San Francisco, and Tel Aviv.  And more are scheduled for the remainder of 2010.

Including right here in Detroit on October 20th.  Credit goes out to a lot of movers and shakers here in the Motor City, including General Motors’ social net guru, Christopher Barger.  This is an exciting thing for this area because of the cataclysmic change it has endured as the transition from a manufacturing only environment to a new direction of business and innovation.

I wanted to be a part of this conference, and in dialogue with Jeff, I found out something interesting.  While Jacobs Media’s work in digital and mobile may have been interesting to him, he’s got me slated to talk about the origins and development of the Classic Rock format.

It turns out that Jeff has radio DNA.  In his words, “I have an underlying strong passion for radio.  My roots are in ham radio, but I grew up listening to AM radio from across the country.”

At one time, he ran a rock n’ roll Internet station out of Long Island, using staff from WLIR and WBAB.  And at another point, he tried to reunite the old WNEW-FM crew.

So while his reputation is Internet-based, this is a guy with a real appreciation for audio and how it fits in the context of the real-time web. 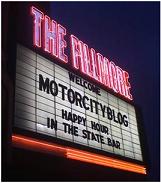 If you’re in the Detroit area, this is an event you’ll want to attend.  And if you live elsewhere, check out Jeff’s site, www.140conf.com, for a schedule of where these conferences are coming next.

There’s excitement in the air for this conference, being held at the Fillmore on October 20th.  Hope to see you there.