JacoBlog - Jacobs Media's Blog: Baby, You Can Sell My Car 2

Baby, You Can Sell My Car 2 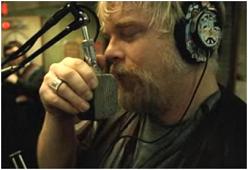 In yesterday’s post, we talked about how radio can potentially be the most effective medium when it comes to selling cars.  But of course, that equation is dependent on whether stations continue to invest in the marketing tool that is most likely to attract consumers to showrooms – the influential local DJ.

But the question is, what are the 2010 requirements for hiring talent?  To best meet the needs of radio’s two most important constituencies – advertisers and audience – what are the DJ attributes that matter most?

A tight board?  Great pipes?

No one’s saying that sounding great on the air isn’t as important to radio today as it was in 1978.  But there are now so many other aspects that go into making a bona fide staff contribution that are often forgotten in the application and hiring process.

How much should appearance matter?  Or the charm and presence to host station and/or client events and work the room?  Or the ability to use social media sites in an effective way that engages consumers and creates viral content sharing?

The fact is, many DJs have historically not been good “people persons,” preferring to hide in the van at appearances or sequester themselves in the air studio, far removed from the salespeople or station tours.

Today’s needs are diametrically different, and while being smooth on the air can still be effective, the ability to connect with listeners and advertisers in settings as diverse as in-store appearances, blogs, and on Facebook fan pages have become just as important.

As we wrote in this space last month, MTV recently completed a search for the next TJ – or Twitter Jockey.  Like many of their innovations, this one had “stunt” written all over it.  But the main point of this promotion shouldn’t be lost on us.  MTV now needs talent that can engage and grow an audience that has moved well beyond watching TV, one video at a time.  Standing on a set wearing leather outfits isn’t going to create loyalty or a sense of belonging with today’s pop music audience.

While older consumers may still enjoy hearing those dulcet tones on their FM station, many listeners – and advertisers have moved on.  What can today’s personalities bring to the table for radio stations struggling to still have leadership and relevance for new music discovery, while putting older songs in some sort of meaningful and current context?

Permit me to toss out a modernized want ad for talent in 2010 – one that raises the bar and ups the requirements necessary to be a media star in today’s landscape.  And let me also suggest that perhaps programmers aren’t effectively looking for “the right stuff,” while job-seekers ought to be repackaging resumes and their materials to show a different side of their skill sets. 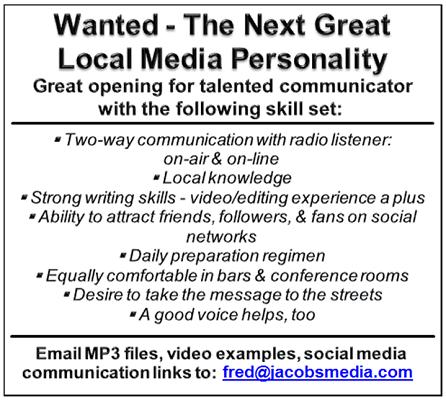 Pictures and video that demonstrate client and listener connections, the ability to write for many different formats (social and copy prep), a desire to engage with a rapidly moving audience, and the instincts to tune into a fickle but fascinating pop culture are all part of the new skills necessary to growing radio careers.

Too often, broadcasters cavalierly write off on-air talent at budget time because they don’t always perceive the value their DJs bring to the operation.  This is a flaw in their expectations and goal-setting as much as it is a deficit in the awareness of talent to adapt to changing times.

Personalities, not stations, sell cars.  And personalities, not logos, build listener engagement.  You beat Pandora, Nanos, and Sirius by creating connections and content that local consumers cannot get anywhere else.

If radio is to morph and grow in this 21st century, we need to create a new road map.

Fred, you really hit the nail on the head with this post. It's so much more than the "chatter between the platter" today. Take it from one old dog who's trying to quickly learn the new tricks. Anybody who doesn't embrace the need to be mulit-faceted to be a successful on-air personality in today's world, just won't be one.

Bob, Linda, thanks much for commenting on this post. I heard from other programmers and DJs "off-line" as well about the importance of redefining the role of the personality in a rapidly changing media environment. Thanks for reading and adding to the conversation.