No brand is immune to deterioration and erosion, even including the biggest spenders imaginable.

In this case, Budweiser.

Anheuser-Busch has suffered in recent years, and the culprit is the under-30s.  Just like in radio, when a product like beer or mass entertainment becomes less cool to younger consumers, there are problems.

How far has Bud fallen?  USA Today reports that sales were off 9% in ’09, and are slated to fall by a similar percentage this year.  Worse, Bud is suffering from a seven-year brand loyalty skid, according to Brand Keys research.  Back in ’03 among national brands they were ranked #16.  This year, they have plummeted down to 220. 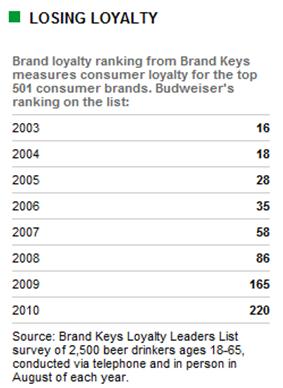 To counter this loyalty cascade, A-B is going commercial-free.  Well, at least the equivalent, by giving away free beer to younger beer imbibers in a campaign that will run several weeks.

Beyond the sampling campaign, Bud is partnering with Facebook to award a free beer to those who hit the legal drinking age (not unlike a station birthday card with a nice gift or discount), as well as new TV ads that will be laser-focused on a one-week period starting Saturday and running until October 3.

So, keep an eye out for these new Bud ads, as they attempt to retrench among young people.  Obviously, boomer marketing has hit a wall as more upscale beer drinkers have drifted to less caloric alcoholic beverages or designer brews. 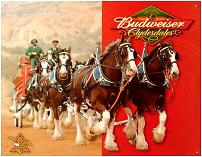 The question is whether a venerable brand, famous for showcasing classic athletes and Clydesdales can engineer a youth turnaround.

As A-B is discovering, if you lose youth, you can lose it all.

That’s a good lesson for media companies, too.

(And we all know how long commercial-free lasts.)

The drop parallels their sale to a foreign owner. Big mistake for the "all American" brand. I would be willing to bet that had a lot to do with this big drop.

I talk to CHR radio programmers all the time who are so focused on the 18-34's (because budgets, managers and owners demand it) that they discount 12-18s almost as a necessary evil. Smart ones though, through the years know that it starts with teens...lose them and you lose the hip factor and your ability to dominate in the 18-34. Ironic truth that has proven true over the years.

Thanks for the comments, Phil and Ric. It's also interesting that KFC is launching a campaign geared toward young guys, using attractive females to promote the brand. Same deal as A-B - declining sales, and it starts with those guys. Of course, we all know where to find them - rock, alternative, and CHR radio.

Phil hit the nail on the head, or the foam...I'm 26 years old and when Bud sold to those Brazlian buy-out bros living in Europe, I felt betrayed. When I see a sentimental Bud spot concerning America or American values it makes me cringe. I'm now drinking Shiner. It's from a one hundred year old Czech brewry in central Texas. They do it right and are as proud American/Texans as you can be. Old people drink it and young people think it's cool....can't get much better than that. PS October is the Shiner run of their bock beer. It's so good you'll throw rocks at Bud and Miller and their foreign owners.