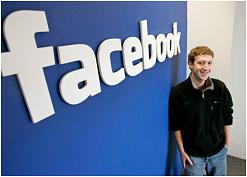 And in fact, something so gigantically generous might just be able to overshadow the negative publicity generated by a new movie.

Or perhaps that’s what skeptics are postulating about Facebook CEO Mark Zuckerberg’s decision to gift the Newark school districts with more money than any of us will make in a lifetime.  Or lots of lifetimes.

So, is this benevolent effort a not-so-subtle attempt to take the spotlight away from the debut of Social Network, a new movie about Facebook that makes Zuckerberg look real bad?  Or is it a genuine effort on Zuckerberg’s part to share some of his billions with children who badly could use an injection of good news – and money?

Maybe it’s a little of both.  And those of us who have been associated with edgy morning shows over the years had to smile just a bit when we read this story.

My very first client some 27 years ago was FM99, WNOR/Norfolk, a legendary rock station even back then, with a dynamic morning guy, Henry “The Bull” Del Toro.

Sadly, Henry passed away in 2002, and left in his wake a rainbow of memories – both good and not-so-good.  Because when Henry was bad, he was very bad.  At a major civic parade through downtown Norfolk, Henry mooned the crowd, along with some of the key government leaders.  His April Fools’ Day stunt at “Mt. Trashmore” still serves as a lesson to overly-ambitious morning guys about what not to do.

But much of Henry’s bad boy antics were mitigated by his charitable activities, many of which were also legendary.  Henry once lived in a cage in support of the local SPCA.  He raised awareness and generated tons of food over the years for local food banks.  He walked to Washington, D.C. on behalf of the Vietnam vets.  And in a military town, the “human flag” event staged by Henry and Tommy Griffiths made national headlines.

And most of the time, these moves weren’t calculated.  They were who Henry was – when he wasn’t being "The Bull."

I conducted scores of focus groups throughout the ‘80s and ‘90s for FM99.  In those days, you could literally greet the respondents, simply say “Henry The Bull,” and they would talk non-stop for an hour without me having to say a word.

And the contrasting views toward Henry were nothing short of incredible.  There was simply a Jekyll/Hyde aspect to Henry Del Toro on the one hand and "The Bull" on the other.  And that was the way he was discussed in focus groups – and in bars and homes all over Hampton Roads.

Just when people would start to gang up on Henry for being a “shock jock” and mindless, sexist jerk, others would jump right in to vehemently defend him, citing all his charity and community work.

Deep down, he was a great guy.

Mark Zuckerberg, I don’t know.  And the debate will undoubtedly rage on about whether this Newark schools windfall was calculated or the real thing.

But to all you morning shows that play it a little close to the edge – and sometimes trip over it – a good deed, a community event, and helping out someone who needs it is always a smart tactic to counterbalance your mischief.

And it will make you feel good, too.

Here’s a tribute video about Henry that I found while researching this blog:

Great read, Fred. Henry was, and still is in many ways, a big part of my life. He was truly a kind soul...coupled with a maniacal and creative mind. I personally knew about most of his bad, and can still proudly say that his good outweighed it by far. Very far.

Thanks for making me think of him today.

Hope all is well with you.

Back (way back) when I was doing mornings at FM-99, Henry was my traffic reporter. His later talents had not surfaced yet, but he did enjoy being on the radio. After I left, Ron Reger went from off-air PD to morning guy with Henry as his sidekick. It didn't take long for Henry to come into his own after that.
One wondes how far he could've gone if his demons hadn't gotten the best of him.

Ed, Phil, thanks for adding some local color. I was shocked when I started searching for Henry how the world has changed in the eight years since his passing. When you Google Image him, you get the small picture we used for this blog, and 50 pictures of the actor, Benicio Del Toro, and the director, Guillermo Del Toro. Sadly, there is very little of The Bull on the world wide web. Thanks again for those memories.

Though Henry and I parted ways after 5 years, one of my saddest days was at his funeral. If you knew Henry well, his influence was indelible. I still think about Henry often, and he visits me in my dreams.

You can hear Tommy and the Bull material on my website- www.TommyGriffiths.com

Hey, Tommy, I knew I'd hear from you on this post. Your time with Henry on FM99 was a big part of the legend. Thanks for sharing, and I encourage you to check out Tommy's site.

Henry was a GREAT uncle he had he ups and downs. He will never be forgotten. Love you Big guy :)