I’m sure Jeff Smulyan was nodding his head in agreement when he read Facebook founder Mark Zuckerberg’s opinion on taking his social media behemoth public. 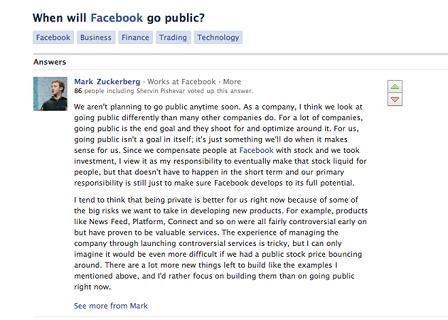 While none of us should worry about Zuckerberg’s financial future, the recognition that risk taking and going public may not be actions that co-exist well is interesting.  (Although it sure doesn’t seem to have hurt Apple or Google.)

You might be thinking that with 500 million+ members, why should Zuckerberg even care?  But think about who was the big dog in social networking just a few short years ago.  MySpace has totally lost its dominant position.  And you have to believe that down the road, there’s every reason to believe that many of us will be connecting and engaging via sites that aren’t Facebook. Zuckerberg may be thinking that he needs as much innovation flexibility as possible.

It also makes you wonder what the radio business might have been like in 2010 if the vast majority of its largest companies had remained privately held.

Radio has suffered from competitive pressures from new media that was inevitable.  But the added inability to invest in R&D, new infrastructure, and other basic planning for the future has most certainly hurt the industry’s place in the new media world.

I know that many people who are hoping those Bush tax cuts stay in place will probably disagree with this position.  But I would argue that the vast majority of the rank and file in radio might tell you that all those promises, hopes, and yes, stock options, really haven’t amounted to much.

Just wondering on a Tuesday morning.