We’ve written a great deal about how cell phones are rapidly replacing that ever-present nightstand clock radio – the one that reliably woke you up to B.J. Shea, Larry Norton, or Ken Calvert.

You can’t stop technology, and there’s a tidal wave of change impacting the way that consumers now haul themselves out of bed. For so many, those bells and tones and songs in cell phones are doing the nasty task of getting us going in the morning.

But don’t throw that clock radio out just yet.

In case you didn’t catch it, pro-golfer Jim Furyk overslept his pro-am tee time last week, disqualifying him from The Barclays, and seriously hurting his chances in the FedEx playoffs. 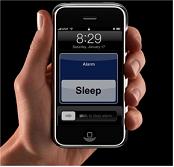 His excuse?  The charger powering his iPhone fell out of the outlet, and the battery died.

“I’ve got no one to blame but myself,” Furyk sadly noted.

Perhaps a piece of old technology would have saved the day.

P.S. Buzz Knight and I are dying to give away a new iPod Touch to the best "linchpin" story in radio.  Who's that hard-working, unheralded person in your station or cluster who tirelessly holds the place together?  It's time to recognize him or her, and you've got until Labor Day to email us your nominee(s).  It's in honor of WMMR's Steve Feldman, a street team member who is widely regarded as that station's MVP.  Email your best linchpin candidates at fred@jacobsmedia.com.