Goin’ Mobile – So Now What? 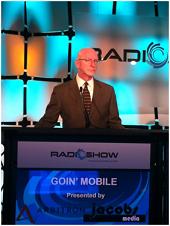 First, thanks to the great SRO crowd we had at “The Radio Show” for our collaboration presentation with Arbitron – “Goin’ Mobile.”  I know we hyped it a lot, but I think the feedback has already told us that this initiative cut through and made an impression.

Paul Jacobs was present for every interview, and Tim Davis lovingly handled production design and editing.  And of course, Arbitron’s Dr. Ed Cohen was the project’s initiator and research guide.

So now that it’s over, what was the point?

To put mobile right up there on the agenda.

This isn’t just another gadget.  Nor is it about turning an iPhone into a Walkman.  “Goin’ Mobile” demonstrated the deep relationships consumers have with their mobile phones, and why radio needs to aggressively go to school on and attack this space.

Pandora was also the sub-theme at “The Radio Show,” and the Edison youth study (and other research reports) demonstrated statistically the growing strength of this pure-play brand.

In “Goin’ Mobile,” attendees witnessed the impact of Pandora on smartphone owners, and some of the potential implications this has on radio.

This presentation wasn’t just a collection of entertaining videos (although there were several of these), but hopefully, an agenda-setting presentation that got radio broadcasters to really think about mobile and their strategy.

With Arbitron, we put together a 6-point “To-Do List” for attendees to take home to their markets: 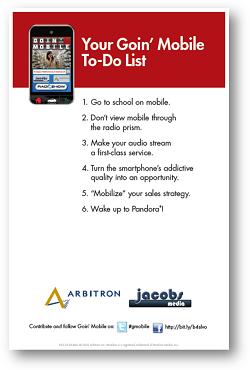 Smartphones are becoming more important to consumers with each passing day.  Since returning home from D.C., I’ve run across a couple of stories that illustrate that point.

The first is related to what we now call “Device Drop” – the phenomenon that occurs as smartphones overshadow other devices, causing their usage to diminish.  In our ethnographic interviews, we noted lessening use of desktops and laptops, camcorders and cameras, gaming systems, GPS units, and while driving, car radios. 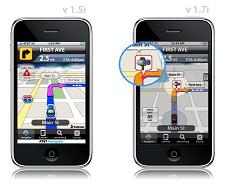 The next gadget facing possible extinction is the radar detector.  A new update to Telenav’s AT&T Navigator for iPhone lets you know when there are red-light cameras present – yet another cool device for the smartphone “utility belt.”

Then there’s Tom Hanks’ newest project, “Electric City,” a series of 3-minute animated shorts about themes like energy use and freedom of information.  Many American movie studios rejected the idea, so Hanks went to Reliance, a film company in Mumbai for financing.  Here’s the thinking:  in India, there are 700 million English speaking people “who are very much used to looking at things that last about three minutes on their phones.”

As we said in the presentation, mobile is a very democratic space.  Anyone can participate, and radio has some strong assets – powerful cumes, personalities, strong brands, local presence and know-how.

But in order to earn a place on a smartphone desktop and become a go-to app, radio needs to get serious about this space, make the necessary commitments, and then design and build apps and WAPs that are compelling and rich.

P.S. Arbitron is working on a streaming webinar so those of you who weren’t in D.C. can see it. More information and an Executive Summary for "Goin' Mobile" are available at: