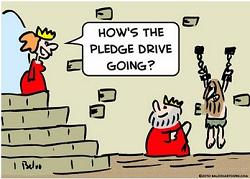 October is a wonderful month – the color changes here in the Midwest, along with the baseball playoffs and World Series, college and pro football, and of course the start of the NHL season.

It’s also the time when many public radio stations are actively involved in “pledge” – the incessant fundraising that keeps them going financially.  We have talked about the necessity of pledge drives for public radio, and the collateral damage they often incur, especially in PPM.

For stations whose survival truly depends on loyal listeners opening up a checkbook or going online to contribute, this is a critical time of the year.

In recent years, public radio has gotten a bit more creative with pledge.  Some stations have begun to acknowledge that like going to the dentist, it can be painful but is still beneficial to keep the programming going.

Even so, it is never fun.

With a major assist from Alec Baldwin, KPLU/Seattle is now airing a series of on-air pledge promos that aren’t just effective – they are hilarious.  Produced by Ira Glass and WNYC, they take on the public radio stereotypes head-on – and then turn them on their side. 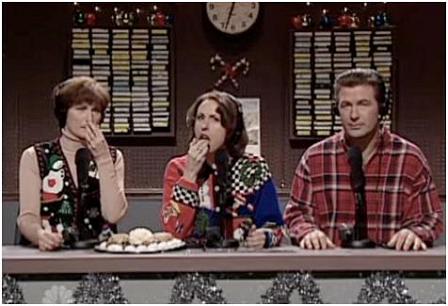 Baldwin’s “Pete Schweddy” bits on Saturday Night Live have been the bane of some public radio execs, positioning NPR and public radio as nerdy, out of touch, and humorless.

Recently, the Betty White hosted “SNL” one-upped Baldwin’s skit on the parody show, “Delicious Dish,” which we discussed in a recent blog.

So if you're public radio, what do you do when you get put in that perceptual box?

Simple.  You meet it head on with a smile – just like NPR has with these Alec Baldwin promos.

They’re effective, hilarious, and self-deprecating.  Only broadcasters confident in their content and their audience could run these promos that make fun of themselves and even their listeners.

And I bet they raise money.

Why hasn't public radio taken the cue from fund raising by the red cross? A shortcode and keyword and a $10 or $20 donation by cellphone would make the week more palatable. That mechanism would save us all from the dreaded radio-thon.

Jay, text to donate was one of the "60 in 60" ideas we showed at the recent Public Radio Program Directors conference in Denver. No question that more digital innovations are necessary to reinvent "pledge." Thanks Larry & Jay for commenting.