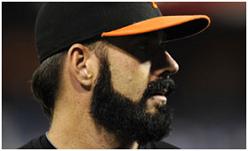 By now, you’ve seen that black-bearded, whacked-out closer for the Giants, Brian Wilson.  He has a real handle on how celebrity, digital, and customer service merge together. Maybe it’s because he’s a tech-savvy Bay Area player.  Or, maybe he just gets it.

Here’s a recent quote about why players should be fan and media friendly:

“I always want to sign autographs.  Fans pay to see us.  We should talk with the media because the media helps with the connection, especially with Facebook and Twitter and everything.  It gives fans an emotional attachment beyond drafting us for your fantasy team.  Maybe now, they find out what we eat for breakfast on Thursday.  When you sign for a million dollars, part of it is saying ‘yes’ when a kid asks for an autograph.”

You can project that quote on the screen during next year’s Morning Show Boot Camp.  Whether you’re playing sports or you're on the air, making a million bucks or just $30 grand, in the major leagues or a small market, the connection to fans has never been more important.

Consider that 12 million people are now “fans” of Major League Baseball on Facebook (or one of its teams) – triple from last year’s level.  According to USA Today, the MLB smartphone/iPad app is opened 1.9 million times a day.

It is about connecting with fans in new ways that are more intimate and personal.  For sports, this is yet another avenue for creating more loyalty and fan engagement.  Friends, fans, and followers who tweet and Facebook message throughout the games – and then before and after – are in the process of becoming social media "reporters" and champions of the sport.

For radio, these tools aren’t just important to bring listeners into our world.  They are critical if we are going to find new ways to grow in an increasingly competitive entertainment and media space.

Pandora doesn’t have personality.  Neither does your iPod.  Social media is the avenue for generating fan satisfaction while meeting new "friends."  Now stations simply have to develop strategies to capitalize on these incredible resources.