No, this isn’t a post about cars, Ford Motor Company, or Detroit.

It’s about leadership, confidence, and testosterone.

A recent profile of Vanguard CEO Bill McNabb in USA Today was an eye-opener.

McNabb took over as Vanguard’s chief in ’08.  Two weeks later, Lehman Brothers went belly up, and McNabb was faced with a fork-in-the-road moment.

When the news about Lehman broke, the Dow plummeted more than 500 points.  With his CIO, McNabb was in Washington, D.C.  The two rented a red Ford Mustang and met with institutional investors, a way of underscoring his confidence in his company by letting them continue to manage during this crazy moment in time.

As the crisis played out, McNabb was highly visible on media outlets and on webcasts – moves that he credits for preserving cash inflows and reserves at Vanguard.

His big concern now is complacency.  McNabb worries that as the stock market climbs, investors and institutions will kick back in intensity, and revenues will diminish.  He points to books like Andrew Grove’s Only the Paranoid Survive as inspirational. 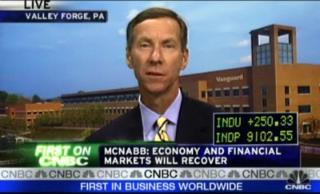 This aggressive attitude has played a role in radio, too.  Some CEOs have been proactive and highly visible throughout radio’s tough financial test these past couple of years.  They have showed up, met closely with staffers on all levels, and have shared their vision.  Some have even driven their versions of red Mustangs.  There is a difference among broadcasting companies that goes well beyond the balance sheets and it's about leadership.

Employee confidence is very much a product of the mindset and confidence of its corporate leadership.  One telltale sign is how some companies have shed many of its strongest employees compared to those who have retained most of their key personnel.

Broadcast professionals in local markets know the deal.  In 2010, no one’s getting rich, so it boils down to how CEOs are approaching winning, losing, competing, and caring.

Employees can smell greed, flawed decision-making, and an “I-don’t-care-about-my-people” attitude.  And they can also sense when there’s a plan, a vision, and whether the company truly cares about the welfare of its workers.

Hopefully, you’re working for the latter.  And if the CEO comes to visit, hope for a hot red Mustang in the parking lot.

Great post. No doubt leadership is often something the radio industry sorely lacks for. But I want to bring this down to the station level.

What should a local station manager working for one of the companies that is exhibiting poor judgement -- firing the wrong people, bad attitude etc. -- do when dealing with his or her staff?

Should they back the company line? Should they be honest with their employees about disagreeing with corporate?

In one case you aren't being a leader and in the other you are risking your job.

I think it's a problem lots of local radio managers are wrestling with and I'm curious to know what you'd suggest.

It's a fine line, but the really good ones understand the fine art of managing up and managing down. I think that many line managers would tell you that they deftly insulate the staff from corporate at times - and vice-versa. Often corporate works most effectively when they don't get bogged down with the local market minutia. And the local team often benefits from being detached from corporate think. Local management can take the best from corporate resources while perhaps "interpreting" the company line in a way that the local team can function the best. It's a dance. Hope that answers your question. Thanks for commenting.