I’ve spoken at many conferences over the past several years and it is always an honor.  But I haven’t enjoyed one as much as I did last week’s “140 Characters Conference” that was held right here in Detroit.

I’ve told you about Jeff Pulver and the concept behind #140conf (as it is hashtagged on Twitter) in earlier posts.  After meeting Jeff and spending time with General Motors’ Chris Barger (their social media maven), I can tell you that there is a genuine commitment to using “the tools” to improve local communities and to give people a voice.  Whether it is helping out businesses, cities and towns, or individuals, #140conf is all about listening and learning.

With short presentations (10-20 minutes tops), there’s room for a lot of different voices and stories in an eight hours conference.  From Mayor Dave Bing to social media maven Chris Brogan to Rabbi Yisrael Pinson of the incredible “Friendship Circle” organization, #140conf Detroit was an amazing event.

And the fact it was Detroit-centric made it all the more special.  The Lemonade: Detroit project is all about making a film about the city that will show the city in ways you cannot imagine.  And that’s part of what we heard from many out-of-town speakers – how Detroit surprised them with its resilience and energy.

So how does Classic Rock fit into this picture?  That was my challenge.  And in the process of discussing the origins of the format and how fans interact with it, my presentation talked about how musicians are using social media to promote themselves and their brands in an era of diminishing CD sales and a music industry in tatters.  Performers that used to fill huge arenas no longer have record labels.  So how can they draw attention to themselves?

Here’s a tale of two bands that were both talked about at the conference. 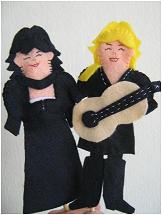 Ann and Nancy Wilson of Heart are back with a new album, and the challenge of how to promote it.  Working with Apex Exposure, they worked a deal with the site Etsy which allows users to buy and sell vintage jewelry and crafts.  The idea was to have Etsy members put together “treasuries” of cool items that Ann and Nancy could peruse, and choose to wear on-stage.  Entrants fired off tweets to draw attention to their treasury packages and concepts.  The good news is that Heart bulked up their Facebook fan page and added many followers to their Twitter profile as a result of this social media promotion.

In contrast, the band Atomic Tom put together a homemade video on the cheap in the subways of NYC.  The end result was shown at #140conf by consultant Hajj Flemings, creator of Brand Camp University (and also emailed to me last week by Buzz Brindle).  It may as well be an iPhone commercial, and it shows the power of viral social media.

As I write this blog, over 3 million viewers have watched this video on YouTube.

Maybe Ann and Nancy should have taken their iPhones on the IRT.

Thanks to Jeff Pulver and Chris Barger for an incredible day of learning.

As photographer Geo Geller reminded us at #140conf, you listen to learn and you learn to listen.

And at the end of the day, Jeff made this announcement, “Next year, I want to come back to Detroit.”

And if this event comes to your town, go.  These are the types of events that radio people should attend.