I had another one of those “aha moments” in radio late last month.  Paul and I were invited to speak at the PRPD conference by our friend, Arthur Cohen.

Yup, an entire three-day conference devoted to issues that impact programmers and station brands.  And attendance was fabulous because public radio managers believe strongly in the education of their employees – especially programmers.  Nearly 500 enthustiastic public radio professionals repreesenting 45 states and a number of countries made the trek to Denver to learn from one another. 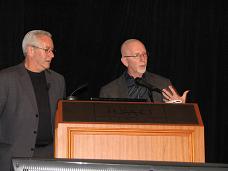 Like radio conventions that you’ve attended, there were panels that focused on meat-and-potatoes topics, like “Strengthening Local News” or “Pledge Drive Behavior.” But in between, Val Geller was delivering her messaging about “Creating Powerful Radio,” while sessions devoted to “Hyperlocalism,” “Coordinating Across Platforms,” and “Young & Diverse Audiences” were well-attended and valuable.

Paul and I put together our version of “60 In 60” – a fast-paced hour of cool digital activities and concepts for a large ballroom of attendees, and Paul also participated on a panel that focused on mobile. 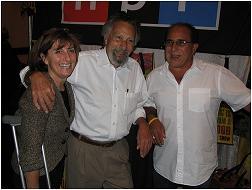 Public radio’s top personalities were in attendance, eager to learn and to spend time with their affiliates.  Among these, Diane Rehm, the “Car Talk” guys (pictured here with NPR’s Margaret Low Smith), Ira Glass, “Science Friday’s” Ira Flatow, “Marketplace’s” Kai Ryssdal, Tavis Smiley, and “On the Media’s” Brooke Gladstone.  Add to that the CEOs from the biggest entities in public radio, from NPR to PRI to CPB.

Last week’s “Radio Show” was a well-attended event, too.  And to those of you who we met in the hallways, on the streets, and because of “Goin’ Mobile,” nice to see you.  But the lack of programmers at this convention and others in radio is striking.  And it calls into question why commercial radio isn’t doing more to educate its PDs - the people in charge of its brands and on-air and online content.

That’s one reason why we’re thrilled to be partnering with Arbitron once again in December.  We are co-producing their successful “Programmer Conference” and our “Summit XV.”  While managers, owners, and corporate staffers are welcome and will hopefully be in attendance, this co-branded conference is geared to programmers and brand managers.

It takes place December 7-9 at the Hyatt Regency Baltimore.  The Summit portion is Thursday morning, 12/9, but we will be involved with special “Goin’ Mobile” materials during Arbitron’s sessions the day before.

All of the particulars – registration information, meals, the hotel – are available at www.arbitron.com/movingup

We are excited to be part of a conference where programmers are a focus, but also where managers, group PDs and corporate personnel, as well as CEOs and owners can spend a couple of intensive days together, learning from these sessions and from one another.  And we're also gratified to keep our string of annual Summits intact.  Hope to see you there - whether you work in public or commercial radio.