Something about the way America does business has gone sour.

Maybe it started with all those reality TV shows.

You have just been voted off the island.

You’ve been eliminated on American Idol.

It simply has become easier and more acceptable in both business and pop culture to rid yourself of people who you just don’t want around anymore.  Especially for political incorrectness. 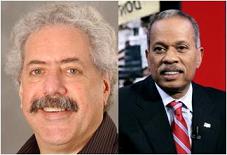 That was the story last week as both Lee Abrams and Juan Williams were abruptly relieved of their duties at Tribune and NPR, respectively.

In both cases, these high-profile big media firings may have had deeper-rooted issues.  Each guy had stirred it up inside their companies in the past, and both incidents may have been perceived as final straws.

But they also raise the question about the middle ground – or so-called “gray area” – that seems to be rapidly disappearing from the discussion.

There has been no shortage of politically correct firings in the past several years.  Helen Thomas. Rich Sanchez. Shirley Sherrod.  Don Imus.  Even Rush Limbaugh lost his "Monday Night Football" gig.  Of course, the earliest one I remember was Jimmy the Greek, and that's going back 20+ years.

I don’t know the specifics of the Abrams or the Williams issues, and there is always more to these stories than what we’re told.

But while some people have long histories of sexist, boorish behavior, that’s never been part of Lee’s MO.  He has always been an outspoken iconoclast.  But sex games and those types of shenanigans have not been part of his repertoire.

As for Williams, that odd balance between NPR and Fox News had been strained for some time.  And now threats to cut off the government funding of public radio are drowning out the real issues between Williams and NPR.  Again, it’s that fundamentalist anger aimed at public radio, which is misguided and just an excuse to take off every medium that does an outstanding and fair job of presenting news and views.

This has nothing to do with his falling out at NPR, but here’s a personal glimpse into Williams’ character.  Last year, Paul and I were visiting NPR.  Our day ended and as we stepped outside to grab a taxi late in the day in heavy rush hour traffic, it started to torrentially rain.  So, our chances of finding a vacant cab just became more difficult.  There was Juan Williams, already on the street, trying to also hail a taxi.  When an available one came by, Williams got in, and invited Paul and I to join him.  We had never met, but he was on his way to the White House to cover a story, and graciously offered two strangers a dry and warm taxi.  This says nothing about his politics or what he's like as an employee, but it does tell you a bit about the man.

So last week while thinking about Juan Williams and Lee Abrams, I watched the Texas Rangers finally vanquish those Yankees to reach the World Series.  And there was their manager, Ron Washington, praising the guts and grit of his team.

Many have already forgotten that back in March, it was revealed that Washington admitted to cocaine use resulting from a failed drug test.  The team was still in spring training, about to embark on a hopeful 2010 season.  Instead of simply firing him - which wouldn't have surprised anyone - Ranger President Nolan Ryan refused to accept Washington’s resignation, giving him that all important second chance.

Of course, Washington's violation had to do with substance abuse - not political correctness.

Maybe 100%, in-or-out, win-or-lose, and zero tolerance ought to be moderated a bit.

Yea, I thought the same thing about Lee, never in his character. Having worked with Lee on numerous occasions, I've never known him to have any inkling of him being sexist or boorish. Completely out of his nature, from what I've seen. Still, he's one of the smartest men in the room, he'll be just fine.

... and oh, wouldn't it be nice to have some middle ground explored in politics and religion these days?
Nice piece, Fred

Thanks for the comments, guys. Yes, some middle ground everywhere would be desirable. I, myself, enjoy a bit of gray. Appreciate you all taking the time to read the blog and chime in.