JacoBlog - Jacobs Media's Blog: All Facebook, Some of the Time

« You and Your Smartphone | Main | All You Need Is Like »

More and more, station staff meetings and jock meetings have become wall-to-wall discussions about Facebook… and Twitter.  And how best to integrate social media with radio station messaging and content.

Too often, there’s desire to connect with social media, but the lack of a strategy to make sense of it all.  “How can we make money on Facebook?” is often a management question, while programmers and personalities struggle with the best ways in which to cram social connectivity into all their other responsibilities.

And now it has come along, thanks to a three-year long study from Vitrue that has drilled down the Facebook experience among the most active sites.  With a base of 1.64 million posts and 7 ½ million comments on 1,500 brand streams, they have a pretty good foundation for making conclusions over a three-year period.

The thing that amazed me about these findings is how similar they are architecturally to the way we design radio stations, clocks, and put together tactics by day of the week and time.  Radio programmers are structurally well-suited to develop social media strategies because they are quite similar to the thinking patterns that constitute smart radio constructs.

The other thing you’ll quickly see is that like studying Arbitron data, these Vitrue “facts” are lacking in the “whys.” Usage patterns are often quite clear, but the explanations behind them are very murky.

Vitrue tells us that social networkers are more likely to respond and recommend during the morning hours.  While 3 p.m. is actually a peak time for Facebook posts, Vitrue reports that morning messages perform the best and end up generating the most comments.

In the Arbitron diary, it’s about Thursday, but in Facebook, it’s Wednesday.  Vitrue found that for whatever the reason (and they don’t really know), there is a greater likelihood for Facebook users to engage on Hump Day.  So while Monday is the biggest post day, Wednesday is the biggest comment day. 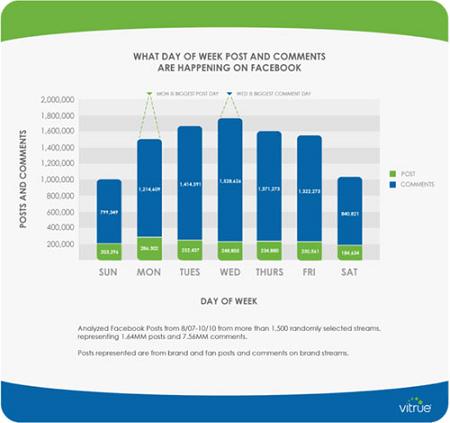 Another interesting usage pattern revolves around the top of the hour.  The first quarter hour is when Facebook action is most likely to occur, more so than any other quarter-hour.  Perhaps that time is a sort of reset for most people, a time when most meetings, most appointments, and many deadlines are set.  Maybe 00:00 is a good time for a Facebook check before diving into more important pursuits.  But the usage stats are pretty clear: 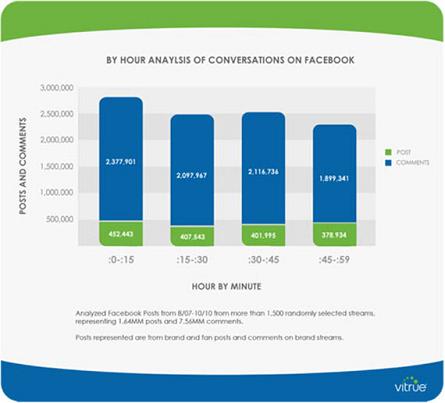 By having a better understanding of usage patterns and posting/commenting activities, broadcasters and brand managers can better strategize “best practices” for using social media tools.

The chart below is a nice depiction of how days and times appear to be drivers for usage: 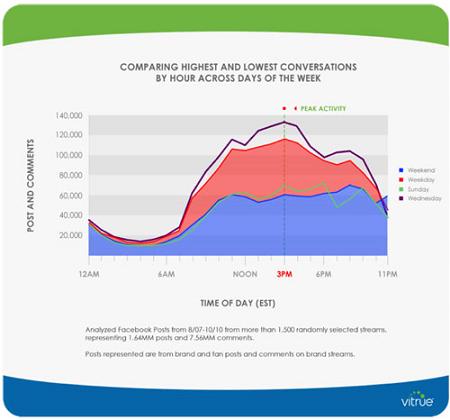 Tomorrow, we’ll look at another study of Facebook usage – one that delves into what drives a user becoming a “fan” of your page.

Thanks to Greater Media's interactive guru, Tom Bender, for bringing  this research to my attention.

And by the way, to learn more about how social media fits into your station's strategy, social mediologist Jessica Northey, is booked for Summit 15 as part of the Arbitron Client Conference on December 9.  She'll be joined by WXYZ-TV anchorman, Stephen Clark - the guy who started the Backchannel, a novel concept that gives his viewers a seat at the table for Channel 7 newscasts.  Both Jessica and Stephen will break new ground at the Summit.  To register or to get more info, click here.